The party included “ultra-premium” liquor and models who lit the union leaders’ cigars.

Money from training funds covered the £5,000 cigar purchase and £2,200 for wine in bottles with custom labels that featured Jewell’s name.

According to Iacobelli, leaders at the UAW sold out tens of thousands of autoworkers.

Over £1 million in illegal benefits was paid to UAW leaders to influence negotiations.

The union signed up for a deal with the FCA that was later rejected by the union’s members. Prosecutors also alleged that an unnamed Fiat Chrysler executive gave a custom-made Italian watch to Jewell’s predecessor, the late General Holiefield, in 2010.

The party is the latest allegation in a corruption investigation that has expanded to include a former member of General Motors board and UAW training centers funded by FCA, GM and Ford.

Jewell received a £1,800 shotgun in 2015 paid for with money that was supposed to benefit UAW workers.

In one incident cited in the documents, FCA officials scripted a top union official on what to say.

It was during a meeting when the company was negotiating to purchase a large stake in Chrysler owned by the UAW Retiree Medical Benefits Trust.

The bribes were to keep senior UAW officials “fat, dumb and happy” .

Investigators are interested in Ashton, a retired UAW vice president appointed to GM’s board of directors in 2014, and Cindy Estrada, his successor in charge of the union’s GM department.

A cop slashed himself with a knife then claimed he was assaulted, a misconduct hearing was told.

PC Anthony Colson said someone jumped him while on duty in a car park in 2016. But a doctor who analysed cuts on his head and hand told the hearing they were self-inflicted. 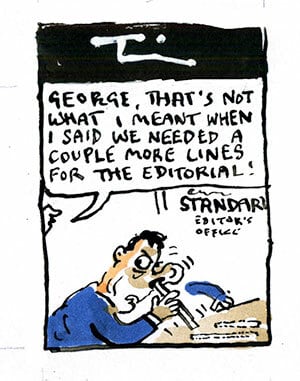 George Osborne has been plugging a report by the Northern Powerhouse Partnership, of which he is chair. It’s one of many jobs he’s fully committed to in return for large amounts of cash.

The report calls for the government to spend an extra £300 million on early years education to ensure “every child is school ready by age five”.

But Osborne slashed national spending on that very area by £650 million.

That led to 1,240 Sure Start centres being shut—a third of the total.

Figures for spending on early years education in the north of England between 2010-11 and 2016-17 are as follows:

Yorkshire and the Humber—Down from £173.7 million to £76 million

In total that’s cuts of 50 percent for the north.

Piers Morgan said in 2011 on his time as editor of the Mirror, “I’ve never hacked a phone, told anyone to hack a phone, or published any stories based on the hacking of a phone.’

A Mirror statement settling a court case over hacking this week said, “Senior employees including editors and journalists, condoned, encouraged or actively turned a blind eye to the widespread culture of unlawful information-gathering activities.”

In his new role as the government’s digital secretary, Tory MP Matt Hancock has decided to launch his own app.

The app seems to be swamped with journalists and people pretending to be other politicians.

There’s at least one Donald Trump, an Ed Balls as well as a couple of Liz Trusses.

There’s also a “live stream” section, which—though lacking an actual live stream—has a chatroom. But the app asks for a host of permissions. “Matt Hancock would like to access to your photos,” that sort of thing.

Information collected “may” include a whole host of things—such as your financial and credit card information. “May” is as bad a word in a privacy agreement as it is as a surname for a prime minister

Nonetheless Troublemaker attempted to use the app but faced the warning that, “Matt Hancock keeps stopping”.

The immigration health surcharge is paid by people from outside the European Economic Area (EEA) who are seeking to live in Britain for six months or more to work, study or join family.

Weyman Bennett said, “The government is trying to divert blame for the NHS crisis onto migrants rather than their own cuts.”

Fox News called on Nigel Farage to explain why people were taking to the streets over the NHS last Saturday.

“Well the big problem we’ve got is a population crisis caused by government policy on immigration,” the bigot said.

And as night follows day, Donald Trump then tweeted that the protest showed people shouldn’t have univesal healthcare.

He tweeted, “The Democrats are pushing for Universal HealthCare while thousands of people are marching in the UK because their system is going broke and not working.”

A courier for the parcel giant DPD who was fined for attending a medical appointment to treat his diabetes collapsed and died of the disease.

Don Lane from Christchurch in Dorset missed appointments with specialists. He felt under pressure to cover his round and faced DPD’s £150 daily penalties if he did not find cover.

It treats them as self-employed franchisees and they receive no sick or holiday pay.