So what? The Sunday People, The Sun and Mail on Sunday all had the story but didn’t run it.

As culture secretary Whittingdale has a powerful influence over press regulation.

Whittingdale was an advisor to Margeret Thatcher and is a member of the Cornerstone Group, a group of traditional conservatives with the motto “Faith, Flag and Family” .

Whittingdale was accompanied by Olivia King at locations including the MTV Awards in Amsterdam in November 2013. He is said to have taken her to the river terrace of the Palace of Westminster to watch the 2014 New Year fireworks over the Thames.

Between 2011 and 2014, the Department of Culture Media and Sport committee, which Whittingdale chaired, conducted an inquiry into the future of the BBC.

It ran a lengthy and high-profile investigation into phone hacking at News International.

Pictures of Whittingdale and King together where hawked around the press. Reporters were sent to the village where King lives. Neighbours were spoken to. Hacks visited the Dungeon club in Earls Court.

But no story appeared. The Independent newspaper was a tenant of Associated Newspapers who own the Mail. The Independent began investigating why the Whittingdale-King story had never been published.

The Independent then killed its story. Troublemaker hasn’t.

Ministers see no evil in offshore

The register of ministerial interests shows that 11 ministers have their assets in blind trusts.

These might be invested in kittens and/or weapons. But it is all good because the ministers keep it a secret.

When they aren’t pressuring Muslims to spy on other Muslims or spying on us, the spooks are protecting rich authors. GCHQ spies helped stop the sixth Harry Potter book being leaked online, according to the Sunday Times.

Nigel Newton from publisher Bloomsbury said, “GCHQ rang me up and said, ‘We’ve detected an early copy of this book on the internet’. I got him to read a page to our editor. But it was a fake.”

Founded in 1692, Coutts is based on The Strand in London. The queen is among its wealthy clients.

It asked Panamanian Mossack Fonseca to set up almost 500 offshore firms through its Jersey offshoot.

Flying through the assessment for cash

The Tories have lauded the “fit for work” assessments that disabled people are forced to go through. But a Channel 4 Dispatches programme has revealed that the tests are a con—and a scam for firms to make money.

One assessor, Alan, working for government contractor Capita said he “flew through” the assessments to get more cash.

He said, “I was getting 20 grand a month, most months. We was flying through them because of that money.”

Alan said he assessed one claimant before even meeting him.

He said of one, who had lost a leg, “When it gets to the nuts and bolts, he does everything really don’t he?”

The tests have wrongly snatched benefits from thousands of disabled people.

Troublemaker is happy that public funds pay the salary of a “special adviser” who helps Samantha Cameron with her social diary and fashion style.

The aide—normally a position for people who help government ministers—receives up to £53,000 for providing the advice.

News that more children are being treated for obesity was music to the ears of right wing hacks this week.

The Daily Express screamed, “WHAT HAPPENED TO TAKING REPSONSIBLITY FOR YOUR OWN LIFE?”.

For the Sun, overweight children became the scapegoat for all the problems facing the NHS.

“We can’t demand more funds for the treasured NHS but still allow kids to gorge,” it explained.

“The health service is going to collapse under the weight of our greed.”Nothing to do with cuts, PFI debts or Tory plans to privatise it then.

The right wing press is in a frenzy over the European Union (EU) referendum. One Daily Express headline declared, “If we vote to remain in the EU Britain will be struck by a giant wave of hidden laws”. Its front page headline on Monday of this week read, “EU WANTS CONTROL OF YOUR PENSION.”

Socialist Worker is for a leave vote in the EU referendum—but not for the same reasons.

The Daily Mail unveiled the roots of criminality this week. It revealed that two year olds who have tantrums “could already have taken the first steps towards a life of crime”. The paper warned against dismissing such tantrums as the “terrible twos”. In fact they could indicate future “psychopathic behaviour”. 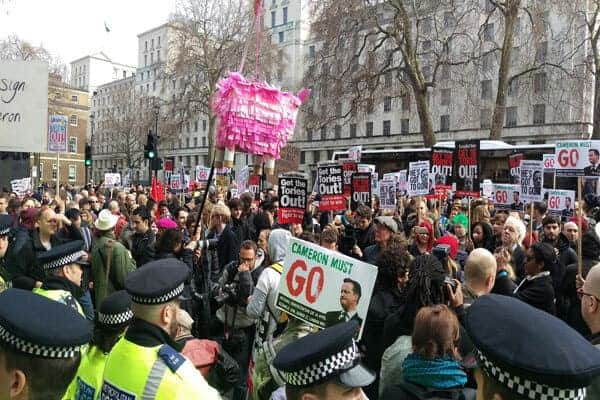