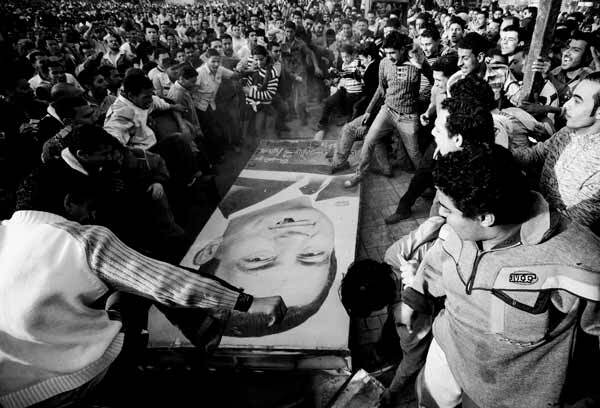 Workers in Egypt show their hatred towards dictator Mubarak

Revolution is being hotly debated since Russell Brand wrote an article in the New Statesman calling for the overthrow of the current political system. And Brand’s argument that we need a revolution to get rid of our system riddled with “lies, treachery and deceit” has received a lot of support. It’s no surprise so many people feel that to get rid of inequality we will need a revolution.

Revolutions have happened throughout history as old ways of organising society were replaced with new methods of producing what we need. The most recent system—capitalism—produces more than any previous system could. It can feed, clothe, house, and educate every person on earth.

It does this by organising the productive power of hundreds of millions of people—not for human need but for profit.

Profit is the gap between the value of workers’ labour and what they are paid by their boss. This daily relationship of “exploitation” is the basis of inequality, poverty, oppression and the drive to war. To get rid of these we have to get rid of profit and replace it with a system based on what people actually need.

Capitalism has dominated the whole of the planet for less than 100 years and as a system of production it is unique. As German revolutionary Karl Marx pointed out, capitalism creates the seeds of its own destruction.

By forcing workers to sell our ability to work in order to survive and profit from their exploitation, the system creates its own gravedigger. Capitalism created a majority working class with an interest in the system’s destruction.

When that class refuses to work, by going on strike, it aims a blow at the heart of capitalism itself—its profits. This is why socialists say workers have the power to paralyse the system and, ultimately, to overthrow it. That is true wherever they work.

Every strike is a lesson in this power—the bigger the strike the more experience workers gain about their power. Drawing lessons from the 1905 Russian Revolution, the Polish revolutionary Rosa Luxemburg described strikes as a “living political school”.

For the working class to overthrow Russia’s rulers they would need “a high degree of political education, of class-consciousness and organisation.” This would be gained, “By the fight and in the fight, in the continuous course of the revolution.”

But for workers to win and reconstruct society to reflect the needs of the vast majority they need a fighting revolutionary party. This can organise and spread the best lessons of workers’ experience.

Russia’s successful workers’ revolution in 1917 was choked to death by years of isolation and war. But wherever there is capitalism there will be revolution. The current economic and political crisis has proven this to be true in Egypt and North Africa.