Immigration controls should be abolished

This article is over 7 years, 0 months old
Workers have no interest in maintaining controls on migration—they exist to protect the powerful and should be scrapped
Downloading PDF. Please wait...
Tuesday 28 April 2015

Politicians say we must “control” immigration. They warn that, without controls, so many people would come to Britain that society wouldn’t function and services would collapse.

Yet controls haven’t always existed. Restrictions on migration emerged in the 20th century.

The first immigration controls were introduced in Britain in 1905. Before that anyone could come here, if they had the means to. This didn’t lead to a mass influx of people.

It isn’t true that the world’s population would flock to Britain given half a chance.

People migrate to flee persecution and war but also to make a better life.

That’s why immigration falls during recessions and rises in boom times. People have always migrated and capitalism encourages it.

Immigration controls aren’t linked to actual numbers of migrants. Instead our rulers use them for their economic and political ends.

The same bosses and politicians who whip up panic over immigration encourage migrants when it’s good for business.

As the Industrial Revolution swept Britain in the 19th century Britain’s rulers didn’t impose controls because they needed more workers. But at the turn of the century Britain faced economic crisis.

Bosses needed fewer workers and migrant workers led strikes to defend jobs. Some people emigrated. And a 1903 Royal Commission found the number of migrants in Britain was small compared with other European countries.

Yet the ruling class whipped up a panic with lies about immigration and brought in the 1905 Aliens Act.

And as Britain’s boom slowed in the 1960s more people left Britain than entered it. This didn’t stop politicians arguing for harsher controls.

The 1905 Act, like all immigration controls, was racist. It targeted Jewish migrants from eastern Europe—or as Liberal MP Cathcart Watson described them, the “refuse and scum of other nations”.

The Act talked of keeping out “undesirable aliens”. This encouraged disgusting comments such as that from Tory MP W Hayes Fisher, who attacked “pauper and diseased alien immigrants”.

The ruling class continued to use controls to stir up racism. A cabinet committee set up by the Labour Party in 1951 pointed out that they would “as a general rule, be more or less confined to coloured persons”.

And Labour home secretary Merlin Rees admitted in 1978 that controls were aimed at blocking “coloured” migrants.

The bosses and the rich are responsible for workers’ poor conditions and overstretched services, not migrants.

For instance, migrant workers could be employed to expand key services that all workers rely on.

Yet those services strain at the seams because they aren’t funded properly.

However many migrants come to Britain they will not be to blame for the lack of services, housing or jobs that all workers face. But it helps the rich if ordinary people blame migrants instead of them.

Socialist Worker is against all controls. We think people suffering poverty and war have every right to try and escape—and that workers should be free to go where they want.

Immigration controls hurt poor people while the rich can go where they like.

Controls divide working class people and encourage us to see other workers as enemies instead of allies.

They exist to protect the power and privilege of the rich, and we should scrap the lot. 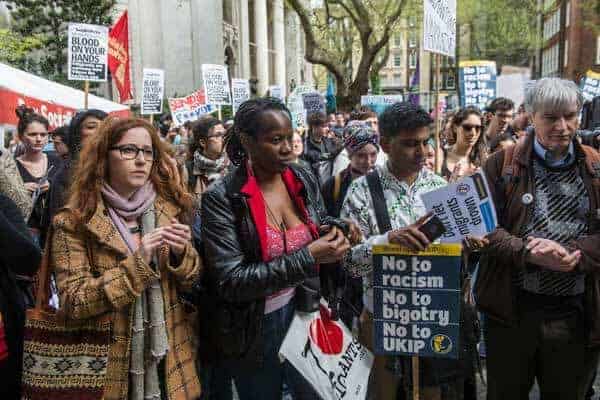