A split ruling class with no answer to the crisis

This article is over 13 years, 1 months old
Gordon Brown has been stung by remarks from Peer Steinbrück, the German finance minister, who described Britain’s response to the economic crisis as "crass Keynesianism".
Downloading PDF. Please wait...
Monday 15 December 2008

Gordon Brown has been stung by remarks from Peer Steinbrück, the German finance minister, who described Britain’s response to the economic crisis as “crass Keynesianism”.

These words came at a bad time for Brown. The pound has crashed towards parity with the euro and treasury estimates of the public sector borrowing requirement are looking increasingly over-optimistic. No wonder Tory leader David Cameron has gleefully lined up behind Steinbrück’s remarks.

But there is more to this than just a spat among politicians. These arguments reflect a deeper split in the European ruling class.

One section, including Brown and France’s Nicolas Sarkozy, has followed the US course of spending public money to try and stave off economic collapse. But in other countries – such as Italy, Greece and Ireland – the ruling class has turned to “austerity measures”. They have slashed public spending to try and balance their budgets.

The fact is that neither side has an answer. The austerity measures in Greece have already sparked an explosion of popular anger against them. And the Keynesian measures proposed by Brown will do little to halt the crisis. What we need is an end to the market – and a sharp turn to collective social control of the economy.

X Factor’s Gamu gets our vote to stay 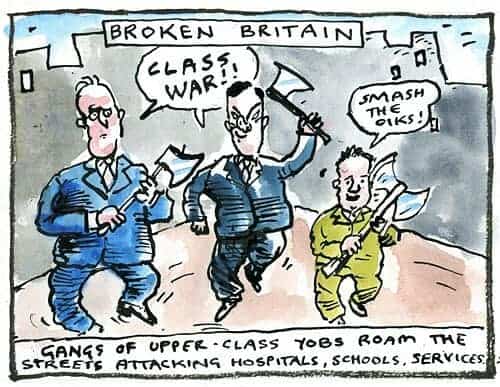 Make 3 October a day of rage at Tory cuts