This article is over 9 years, 6 months old
Bankers have become symbolic of everything that is rotten in the system. The latest scandal will only confirm for millions of ordinary people that the bosses will stop at nothing to stuff more money in their pockets.
Downloading PDF. Please wait...
Tuesday 03 July 2012

Bankers have become symbolic of everything that is rotten in the system. The latest scandal will only confirm for millions of ordinary people that the bosses will stop at nothing to stuff more money in their pockets.

Barclays chief executive Bob Diamond has been forced out, and more may go. But Diamond’s departure is not a sign of remorse. Nor does it signal that banks will change their practices.

It’s great to see him forced out, but sacking a few individuals can’t stop the rot—this goes to the very heart of the system itself.

Banks have always been a central part of capitalism. They exist to provide the lubricant of credit for bosses wanting to expand, with the funds deposited by bosses with a surplus.

Whether they’re the old school City gents in their top hats or the young brash dealers in their loud shirts—they are all in the same business. And that is to make it easier for bosses to rake in bumper profits.

The huge expansion of the finance sector came about because bosses thought it looked like a way of making easy money. But this bloated finance sector was not the cause of the economic crisis—it is a symptom of a crisis of the whole capitalist system.

It reflects the fact that bosses looked for alternatives because profits were being dragged down in production in the rest of the economy.

Ever more obscure mechanisms were created to gamble and hide debts. This meant that even those in the business didn’t understand what they were doing.

But as long as profits were rocketing, no one asked too many questions. The City became an overheated casino as more and more tried to get in on the game.

Politicians, both Tory and Labour, were bewitched by the apparent effortless profits to be made in the hidden world of financial markets. That’s why successive chancellors have gone to posh

City dinners to heap praise on the bankers and brokers for their “ingenuity” and “drive”. Now many politicians have changed their tune and are calling for more regulation.

Of course, any controls we can put on the rich and powerful—to curtail their ability to soar ever higher into the stratosphere of wealth—are a good thing. These are the same people who tell us that we have to swallow austerity in order to pay their bills.

But bank scandals, corruption and crisis will not be stopped by regulation. They are built in to the system, a system rooted in the drive for ever greater profits. This is how capitalism works. 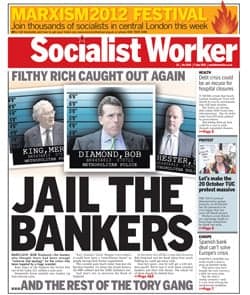 Jail the bankers... and the rest of the Tory gang 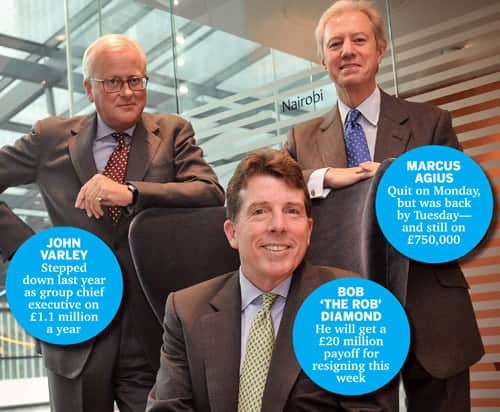