BA boss Willie Walsh, backed by torrents of drivel in the right wing media, says a strike by cabin crew will wreck the company.

But the blame for BA’s current economic problems lies with management, not the workers.

The company’s strategy, led by Walsh, has been to expand long haul and business flights in an effort to become the major global airline – but it has failed.

BA bosses are also responsible for millions of pounds lost in the fiasco of Heathrow Terminal 5’s opening last year.

They are trying to plead poverty and say they have to make cuts for financial reasons.

But BA is not bankrupt – it has amassed a £2 billion war-chest to cover the cost of a strike.

And City analysts predict the company will be back in the black by 2011.

They point to the £415 million it can recoup by selling its stakes in Vueling Airlines, Flybe and the Amadeus booking system.

And BA recently found the funds to buy 55 percent of Iberia’s shares as the two airlines merge.

The attacks on cabin crew are not a response to BA’s recent losses. They have been planned since June 2008 – when BA was making money. 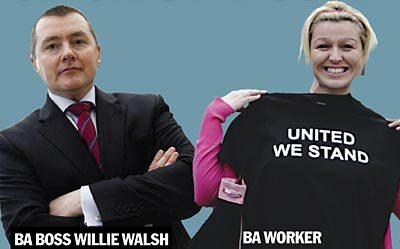 Cabin crew get on board for a fightback