Covering up abuse to maintain their system

Only weeks after the first revelations of horrific serial sexual abuse committed by Jimmy Savile, yet more child abuse scandals have come to light.

The cover-up of abuse at a children’s home in north Wales goes right to the top of the establishment. The ruling class is in a panic as allegations mount that a group of highly placed individuals organised to abuse children in care homes.

Allegations of child abuse in state institutions are not new. But it often takes years to be uncovered. Serial abuse was exposed in the 1970s in Kincora boys’ home in Northern Ireland after a cover-up involving the police and senior politicians.

The media has made much of sexual abuse of young people in Rochdale in recent months, saying Pakistani men are the problem.

But another child abuse scandal in Rochdale was ignored—when seven boys who went to the police about being sexually abused by Liberal MP Cyril Smith in the 1970s were ignored.

They had been residents in a boys’ hostel set up by Smith himself. But Special Branch in London took over the cases and buried them.

Like Savile, Smith was allowed open access to this and another special residential school he established for children in Rochdale which only closed in 1995.

Such institutions impose a hierarchy of power over vulnerable young people, making them feel unable to challenge their abusers.

These scandals are shocking, but the media coverage can give a distorted picture of the danger of child abuse. The reality is that the vast majority of child abuse takes place within the family and not by strangers.

Studies show 80 percent of offences take place in the home of either the offender or victim—multiple abusers are the minority.

The family plays a contradictory role in modern capitalism. It can act as a haven from a harsh alienating world—a place where people hope to receive unconditional love and support.

The family is eulogised by the media, advertising and politicians across the board. We are expected to fulfil all our dreams of a happy life within four walls of the family home.

Sexual abuse is a product of a rotten, warped society. The Tories may feign outrage at child abuse.

But they cover it up in order to maintain their system—the system that creates it. 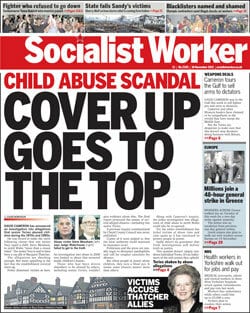 Child abuse scandal: the cover-up goes to the top