The general election campaign has officially begun—though in reality it has already been going for more than a year.

Election froth and trivia dominate the media. Politicians get grilled in television studios or have cosy chats in their kitchens. The election is treated like a game.

Yet there is a deep crisis in official politics that the mainstream press barely understands.

We are going into a general election and, for the second time, it’s not clear if any party will get a majority.

The Tories should be on the ropes after five years of austerity. Yet Labour has failed to beat them in some opinion polls.

The problem is that there’s a stifling consensus on the two biggest issues in the election—austerity and racism.

The Tories have no shame about their enthusiasm for attacking working class living standards. They revel in having an excuse to wield the knife on the public services they resent having to provide.

They also use every opportunity to whip up racism against migrants and Muslims. The Tories hope to distract workers from blaming them for low pay, poverty and lack of affordable homes.

Meanwhile, Ed Miliband and the Labour leadership don’t challenge the Tories’ logic. They offer a diluted version of Tory austerity. And instead of challenging the right’s racist agenda they continually pander to it.

This fertile ground has allowed the racists of Ukip to grow.

In Scotland the independence referendum caused a political earthquake—and the aftershocks are still being felt. The latest polls show Labour risks a virtual wipeout, potentially losing at least 29 out of its 41 MPs in Scotland.

The Scottish National Party (SNP) has been the main beneficiary of the politicisation around the referendum. It could see its six Westminster MPs leap to 43 seats on 7 May.

The SNP’s leaders have successfully portrayed themselves as an alternative to austerity.

But they have driven through their own massive cuts in Scottish councils where they hold or share control.

In England, Scotland and Wales the Socialist Workers Party is standing and supporting candidates as part of the Trade Unionist and Scottish Coalition (TUSC).

TUSC supporters are out campaigning to oppose every cut and to reject racist scapegoating.

The turnout and mood on the Stand up to Racism demonstrations last Saturday show the potential for mobilising against the rotten consensus.

The next six weeks will be dominated by politics. But it will be the politics of—mostly—men in suits telling ordinary people they have to suffer.

Socialists have to be out in the streets, in workplaces and in every campaign offering a very different sort of politics that organises against austerity and racism. 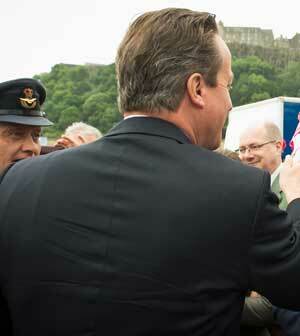 Cameron says he'll step down after second term - go now, and take your rich mates with you