This article is over 15 years, 3 months old
The bosses of British industry are demanding further financial deregulation and want Gordon Brown to cut corporate tax. Or, they warn, they will have to move to where taxes are lower.
Downloading PDF. Please wait...
Saturday 28 October 2006

The bosses of British industry are demanding further financial deregulation and want Gordon Brown to cut corporate tax. Or, they warn, they will have to move to where taxes are lower.

Brown’s response? To invite 35 of the City’s finest round for breakfast, including the chairmen or chief executives of HSBC, Barclays, the Stock Exchange and Lloyd’s of London.

Brown offered a concession to the insurance industry by promising to review its tax burden. That was seen as a signal that he was considering cutting corporate tax.

Lord Levene, chair of Lloyd’s of London, said Brown “took on board our concerns” during some very “full and frank” discussions.

Health workers who have been offered a pay rise of just 1.5 percent might note Brown’s generosity when it comes to City financiers.

Fifty years ago Britain, France and Israel launched an invasion of Egypt. Their aim was to seize the recently nationalised Suez Canal.

All three feared and hated the forces of Arab nationalism symbolised by Egypt’s President Nasser. As with Iraq the decision to invade split the British ruling class down the middle. There was widespread opposition to the attack.

With the US refusing to support the invasion and the pound facing collapse, British prime minister Anthony Eden agreed to withdraw. Even if the invasion plan had succeeded it is difficult to see how an occupation would have lasted. Britain had been forced out of the canal zone by a guerrilla campaign two years earlier.

As with Iraq today, initial military success would have collapsed into ultimate defeat.

There is one huge difference in the parallel between Iraq and Suez. Fifty years ago, after some initial hesitation, Labour organised a massive rally against the war in Trafalgar Square.

Eden resigned 18 days after the final British troops evacuated Suez. Tony Blair may have lasted longer than Eden – but he will be identified with catastrophe in Iraq as much as Eden is remembered for leading the British Empire to its final death throes.

This week Trevor Phillips, the New Labour chair of the Commission for Racial Equality, was forced to backtrack on the debate on Muslim women wearing the veil.

“What should have been a proper conversation between all kinds of British people seems to have turned into a trial of one particular community, and that cannot be right,” he told the BBC.

This was a a significant retreat on his part. But in all other respects he still peddles the New Labour falsehood that British society is becoming “socially polarised by race and faith”.

Population experts say that ethnic minorities are becoming progressively more integrated and mixed, not less. Notions of “Muslim self segregation” or “white flight” are myths.

Phillips knows this, because he was roundly criticised and corrected after his lurid claims last year of a Britain “sleepwalking to segregation”.

That he repeats these myths – and compound them with disgraceful attacks on eastern European migrants – demonstrates that he is “not fit for purpose” as the head of body that is supposed to protect minorities from racism.

How to deliver Blair a killer blow on 10 June 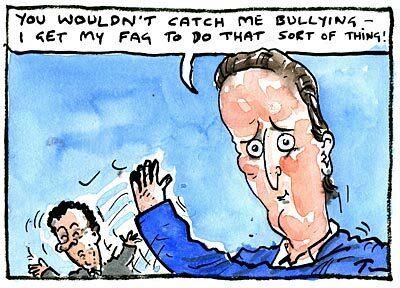 Unity across nations with Polish workers