The right wing crowed when Gordon Brown announced his plan to quit parliament.  And Labour’s left mourned—not least those trying to “reclaim” it from New Labour.

It’s a strange end for the man who was chancellor for 11 of New Labour’s 13 years in government and prime minister for the other two.

Brown signed the cheques for Tony Blair’s wars and bailed out the bankers after letting them off the leash.

Whatever his private distaste for bigots, Brown brought the poisonous National Front slogan “British jobs for British workers” into the mainstream.

Brown may have had a bitter personal resentment towards Blair. But there’s no evidence he disagreed with Blair’s belief that Labour had to suck up to the bosses.

Yet unlike Blair, Brown also kept one foot in Labour’s grassroots—at least symbolically.

His success in rallying their opposition to Scottish independence showed that this still counts for something.

The way trade union leaders read so much out of Brown’s supposed discontent tells us more about them than him.

Labourism depends on lowering workers’ expectations and hopes in the name of running the bosses’ system.

That fatal compromise made Blairism possible.  But no one personifies it better than Brown—except possibly Ed Miliband. 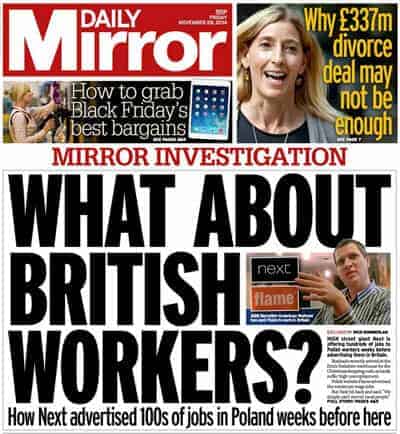