Muslims face a new racist crackdown after the identity of “Jihadi John” was revealed.

The fact that he was brought up and educated in London has led to a moral panic about Muslims and “radicalisation”.

The Tories and media have called for yet more surveillance and laws to police Muslims.

They want all Muslims to be seen as a potential threat.

In this atmosphere anyone who tries to look at the reasons for the growth of Isis is accused of being an “apologist for terror”.

The campaigning group Cage talked of its dealings with “Jihadi John” and pointed to the harassment he faced from MI5.

Now Cage faces a loss of funding, and organisations that have worked with it, such as Amnesty International, are under attack.

Cage’s bank accounts were frozen after its leading representative, Moazzam Begg, was arrested last year. He was released without any charge.

We are constantly told we have to “do something” about Isis as the media replays video clips of the terrible beheadings of hostages.

But “doing something” usually means some sort of Western military intervention in the region.

This will never be a solution. The Western imperialist powers are not just part of the problem—they are the problem.

Western wars, occupations, bombings and backing for brutal dictators has killed, maimed and impoverished millions in the region.

We don’t know the names of the many victims of these actions.

Their families’ grief is not played out constantly on our television screens or on newspaper front pages.

The actions of Isis are brutal. But its violence does not match the scale of atrocities inflicted on people in the Middle East by the West and its allies.

The West has helped create, fund and arm sectarian militia in Iraq.

That was an important part of a strategy to win dominance in the country after the invasion that brought down Saddam Hussein—a former Western ally.

Now these sectarian groups have taken root and the divisions deliberately fostered by the West are deeper than ever.

Shia militia hunt down Sunni Isis forces and Sunnis then look to Isis for protection.

Yet such groups offer nothing to the majority of ordinary Iraqis. Isis is no liberation movement, whether in Iraq or Syria.

It is a reactionary, sectarian force that opposes united popular resistance to imperialism and dictatorships.

Trying to understand it is not a crime. But creating more wars abroad and persecution of Muslims at home should be.

We have to say no to the West’s wars and no to Islamophobia. 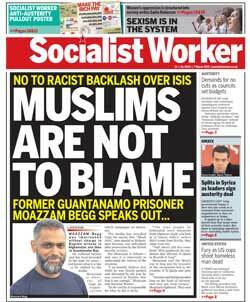 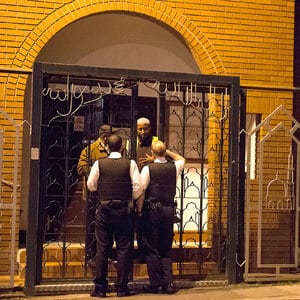