This article is over 18 years, 10 months old
News reports treat the war like a video game. But anti-war protesters are organising and refuse to be silent
Downloading PDF. Please wait...
Sunday 23 March 2003

Cluster bombs, depleted uranium shells and massive destruction of civilian areas. That is the reality of the bombardment George Bush and his attack dog Blair are inflicting on the people of Iraq, where nearly half the population are children.

Arch-warmonger Donald Rumsfeld, the US defence secretary, chillingly threatened on Thursday that this war ‘will not be a repeat of any other conflict. ‘It will be of a force and scope and scale that is beyond what has been seen before.’ The awful picture above shows the human toll behind unleashing more force than the last Gulf War.

This girl was blown apart in the city of Basra a few weeks ago in what we were told at the time was a ‘precision attack’ on an ‘Iraqi military target’. Now US and British planes are launching thousands of such raids. The US military is 396 times bigger than Iraq’s and many times more destructive. This is not a war. This is a brutal, one-sided invasion. But that’s not the message in the media.

The few reports from journalists in Baghdad are drowned out in a deluge of pro-war commentary, computer generated graphics and reporters behaving like they’re taking part in a war game. Robert Fisk has reported honestly and accurately from war zones for over 30 years.

Days before the war he predicted what would happen to the journalists ’embedded’ in US and British military units: ‘Once the invasion starts, they will lose their freedom to write what they want. There will be censorship. And, I’ll hazard a guess right now, we shall see many of the British and American journalists back to their old trick of playing toy soldiers, dressing themselves up in military costumes for their nightly theatrical performances on television.’

The unprecedented opposition in Britain to the war is at best barely reported. The BBC has gone furthest in squeezing anti-war opinion off the airwaves. This is despite the fact that most opinion polls show a majority of people are opposed to the war.

Editors of 130 regional papers have said they will not publish anti-war views or report opposition to the war while the slaughter takes place in Iraq. Instead, the media is awash with military briefings and interviews with experts that say nothing about the reality of the war.

The aim of this great lie machine is to try to make the millions of people who oppose this war feel isolated and powerless. Tony Blair knows that 12 months of sustained propaganda failed to convince the majority of people to support an attack on Iraq.

To carry through mass murder, the government needs to silence the anti-war feeling so it can pretend everyone is uniting in the ‘national interest’. Those lickspittle Labour MPs who voted for the war, above all Clare Short, are part of the deception. It is vital that the anti-war voice punctures through the lies.

It was right to protest while the US and Britain planned this war crime. It is even more right to protest as they commit it. The extraordinary global anti-war movement delayed Bush and Blair for months. It has forced them to pretend they will fight a ‘clean war’, leaving them open to an even bigger backlash when truth about atrocities emerges.

From Saturday’s Stop the War Coalition demonstration we need to take the anti-war arguments back into every workplace, school, college and area. Building stop the war organisation everywhere can challenge the pro-war propaganda and pile the pressure on the politicians who have blood on their hands.

We need to maintain the pickets and protests and hound pro-war MPs so they cannot continue to pretend they are ruling over a ‘normal’ country. The rallies, walkouts and workplace protests on Thursday gave a glimpse of the power that can bring the country to a halt. It can force Britain out of the war (and Blair out of office).

School students inspired adults everywhere by the action they took. They also put the leaders of the TUC to shame. Those trade union leaders should be calling action like Thursday’s on an immense scale. Every time there is an atrocity in this war it should be met with a howl of anger at the bloody price of this war for oil and US power.

US firms eye up profits

THE US aims to reap a big reward from conquering Iraq. US corporations are circling like vultures hoping to win lucrative contracts. One frontrunner is Halliburton, the oil and construction multinational connected with US vice-president Dick Cheney.

One lobbyist for corporations that want to get the contracts from the US government says, ‘There’s not a lot of people pushing to get involved in Afghanistan or Bosnia. There’s no long term pay off there. ‘People are much more excited about Iraq. There’s going to be a whole lot of people who make money out of this.’

USAID is the US government agency Bush has lined up to oversee ‘reconstruction’. Its plans talk of creating ‘opportunities for international trade’ and ‘promoting the private sector’. Its partners will be US multinationals. The revenues from Iraq’s oil, which Blair claims will be held ‘in trust by the UN’, will flow directly to these corporations.

There will be no genuine democracy. USAID’s statutes even call for banning abortion in countries it works in – a sop to the right wing Christian fundamentalists around Bush.

US corporate power, and the government, are denying Iraqi women the right to control their own bodies, and carving up the country. That’s what the ‘liberation’ of Iraq amounts to.

THE DRIVING force behind this war and the chaos it will leave behind is becoming apparent. The Turkish army, the second biggest in NATO, massed on the border of northern Iraq and began sending units into the Kurdish-controlled area. The most cynical pro-war argument, one favoured by commentators like the Observer’s Nick ‘Bomber’ Cohen, is that it will liberate the Kurds and other Iraqi people.

Now it’s clear the Turkish state wants to seize northern Iraq with its oil-rich cities of Mosul and Kirkuk. Neighbouring Iran also has designs on slices of Iraq and has a proxy force there. Different factions in Iraq also want to grab what they can.

Get your Socialist Worker every week. This special issue would not have been possible without the many people who rushed in reports and photographs. Thanks to all of you
Topics Iraq war, Stop the War 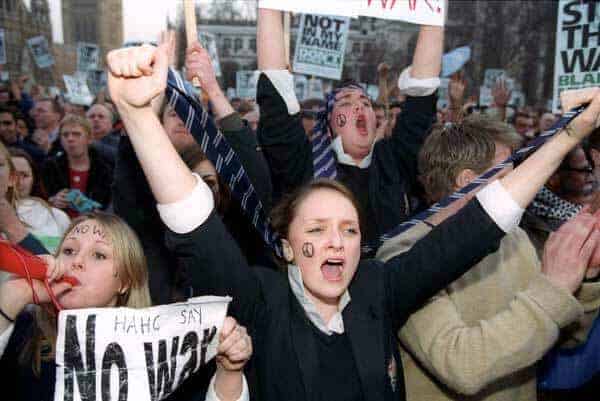 Anger erupted across Britain as the attack on Iraq began

10 reasons why the war in Iraq is wrong