The latest MPs’ scandal shows that there’s one law for the rich and another for the rest.

Some 180 MPs have “second jobs” helping them rake in around £7.4 million a year.

Yet they rage against so-called “benefit fraudsters” who try and supplant their meagre income by earning the tiniest fraction of what MPs rake in.

Many unemployed claimants get just £67 a week while MPs grab £67,000 a year—plus expenses.

Sir Malcolm Rifkind, the top Tory at the heart of the scandal, said it’s “unrealistic” to expect MPs to live on this salary.

Yet the Tories slash benefits to give people more “incentive” to work.

A poor person trying to earn more money faces a raft of laws and regulations aimed at keeping them poor. MPs face no such rules—and David Cameron has promised he won’t introduce any.

Cameron has complained that benefit claimants have a “sense of entitlement”.  He doesn’t want working class people to expect a reasonable standard of living.

In reality, it’s greedy politicians who have a sense of entitlement.

Rifkind issued a bizarre threat in response to the scandal.

He warned that if MPs were told they had to choose between parliament and their business interests “they won’t come to the House of Commons at all”.

Most ordinary people in Britain would probably be glad to see the back of them. 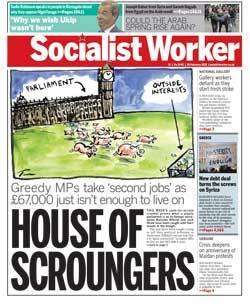