Party leaders hide from the reality of war

This article is over 11 years, 9 months old
The televised leaders’ debate this week was scheduled to be on foreign policy.
Downloading PDF. Please wait...
Tuesday 20 April 2010

The televised leaders’ debate this week was scheduled to be on foreign policy.

We can be sure it won’t include a meaningful discussion of the war in Afghanistan.

While Nick Clegg may try to claim that the Lib Dems are different to the other main parties on the issue, it is the narrowness of the debate between them that is the most startling thing.

They all support a war that has added to the misery of one of the world’s poorest countries and caused the death of countless Afghans and occupation troops.

Millions of people continue to be oppressed, under a Western-backed government.

A new poll this week revealed that 77 percent of people in Britain want troops withdrawn from Afghanistan.

None of the major parties speak for them.

The leaders will debate the supposed lack of equipment for the military and the war strategy. They won’t discuss its imperialist nature, that makes the conflict fundamentally wrong.

The authorities have tried to close down discussion of Afghanistan during the election.

The Ministry of Defence has even stopped journalists embedded with the British army from reporting on the war for the duration of the election campaign.

Our leaders fear what will be unleashed if the real reasons to oppose the war are debated fully.

But we can grab hold of any crack in the monolith to allow the anti‑war feeling through.

Socialists and anti-war activists should use the next two weeks to expose all the main parties’ backing for an unconscionable slaughter.

Only troop withdrawal and real self-governance can improve the situation for ordinary Afghans.

Anti-war activists will protest at the leaders’ debate in Bristol on Thursday. Assemble 3.30pm to leaflet the audience at Mercure Hotel, Redcliff Hill, BS1 6SQ and protest from 5.30pm at Arnolfini, Narrow Quay, BS1 4QA. For further anti-war activity go to » www.stopwar.org.uk

Is seven billion too many? The racist myth of ‘overpopulation’ 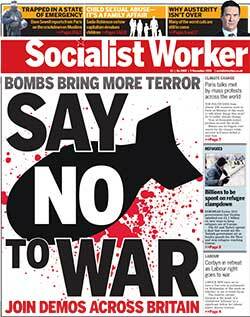