Remember the fallen – and keep up the fight

This article is over 9 years, 5 months old
Ahmad Sami was a 17 year old high school student and member of the Revolutionary Socialists in Egypt.
Downloading PDF. Please wait...
Friday 15 March 2013

Ahmad Sami was a 17 year old high school student and member of the Revolutionary Socialists in Egypt.

On Saturday of last week he went to the court in Port Said to report on the Ultras protest for the Revolutionary Socialists’ weekly paper, The Socialist.

He was shot dead by police.

He tried to take a photo of a sniper, so they shot him in the head.

Egypt’s dictator Hosni Mubarak has been toppled but his state remains intact.

Now in the name of revolution president Mursi is using state forces to crush the revolution.

A young socialist armed with no more than a camera to bear witness to events and report for a revolutionary paper is a dangerous enemy in their eyes.

At 17 Ahmad had already lived through extraordinary revolutionary upheaval.

He joined a revolutionary socialist organisation. He wanted to make a difference.

The placard he holds in this photograph tells you something about the values of the society that he was fighting against.

It was in response to insulting state compensation offered to the families of 50 children who died after a train crashed into their school bus last year.

It compares that to the prices of livestock and luxury goods.

An Egyptian child is the cheapest price.

No amount of compensation can replace a child.

And there have been too many who have died in the struggle of the last two years.

Hundreds have been mown down by state forces who fear the courage and resilience of the Egyptian masses.

Yet when they murder revolutionaries, they find that more take their place.

The Revolutionary Socialists in Egypt are on the frontline.

But wherever socialists are when one of our side is murdered, it should make us all more determined to carry on the fight.

We are proud to be part of the same revolutionary socialist tradition that inspired Ahmad.

It is a tradition that reaches back through the struggles of generations across the world.

Our struggle for a better world and a socialist society knows no borders.

Our class will take its revenge—and when it does we will remember the comrades like Ahmad who sacrificed their lives for the struggle.

Socialist Worker offers our solidarity and condolences to the Revolutionary Socialists for the loss of their comrade.

But our best tribute is not to mourn but to organise—and to continue the struggle for a socialist society.

Mursi cracks down on Egypt's masses 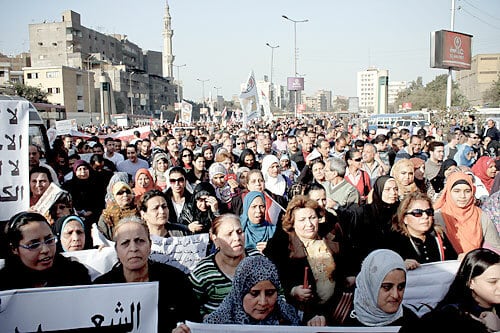