Most ordinary people are genuinely horrified by what happened—but much of the media’s reaction is disgustingly hypocritical.

Reker came to Britain as an unaccompanied minor a few months ago. He may well have been one of those who newspapers such as the Daily Mail condemned for “pretending to be children” to get into Britain.

Such papers hardly let a day pass without denouncing refugees as alien, subhuman and dangerous.

They campaign to shut out the refugees who gather in Calais or risk their lives in flimsy boats to reach Europe.

They suggest that among them are rapists and terrorists determined to murder us.

Having provided the perfect script for racist attacks, the newspapers then throw up their hands in horror when they happen.

This attack—and the stream of racism from the top—means we must redouble our efforts to build Stand Up To Racism as a mass movement.

Everyone can be part of it, and build it in workplaces, schools, colleges and localities.

We need to turn people’s anger away from migrants and Muslims and towards the real culprits for their problems—the Tories, the bosses and capitalism

Everyone can build the demonstration against US president Donald Trump when he comes to Britain.

We also need to work harder to defeat the lies that are used against migrants. Croydon Central Tory MP Gavin Barwell branded Reker’s attackers as “scum”.

But in 2014 Barwell was trying to link high unemployment to migration saying, “More Croydon residents would have jobs if you’d had a better immigration policy like controls on new European Union members.”

That’s the sort of lie that we need to take on wherever it comes from. And we need to confront state racism.

Just last week disabled Lovelyn Edobor was forced into a waist restraint belt and dragged along “like a goat” when the Home Office tried to deport her.

She would then have been deported were it not for activists blocking a deportation flight—for which 17 of them were arrested.

We need to turn people’s anger away from migrants and Muslims and towards the real culprits for their problems—the Tories, the bosses and capitalism.

That won’t be done just by words. It requires more protests and strikes over the attacks on wages, benefits, our schools, the NHS and poor housing.

It means fighting our rulers and the system that produces austerity, racism and war.

Unity in action can beat the attempts to divide us which have such poisonous results—as we saw in Croydon. 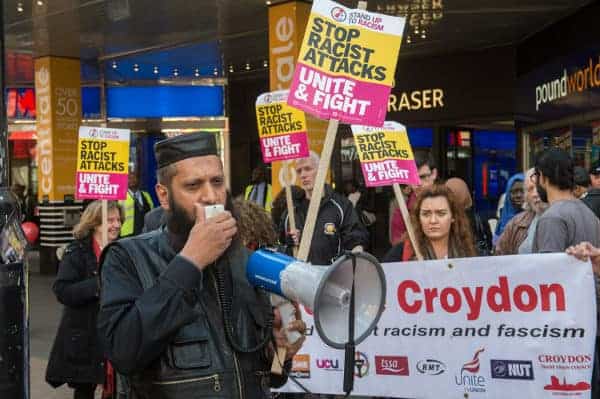