Tax the rich for real

Shadow chancellor Ed Balls’ plan to reintroduce the 50p tax rate on people earning over £150,000 has caused outrage in the media.

Tory central office says the plan “takes Labour back to the 1970s”. But even the staunchly Tory Daily Telegraph newspaper calls this claim “pure bilge”.

A survey for the Mail on Sunday newspaper last week even discovered that more Tory voters support the policy (39 percent) than disagree with it (33 percent).

The reaction reveals an absurd pandering to the very rich that even makes most Tories uncomfortable.

And this was not a particularly radical measure.

Most of the money the rich have isn’t in their personal income. A tiny number of people will be affected.

A party that really wanted to redistribute wealth or attack business would make sure that multinationals, such as Google and Vodafone, actually paid their taxes.

It would do something about corporation tax, which has been reduced under recent Tory and Labour governments.

In this neoliberal world any such suggestion is regarded as utterly unreasonable.

Yet this is something any Labour government worth its salt would have demanded in the 1970s.

And even that falls far short of what bosses actually deserve.

We should take all their assets and wealth under workers’ control. 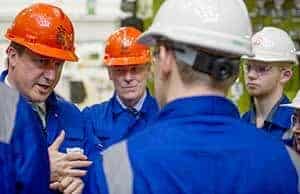 Tory spin of a ‘recovery for all’ is far from reality