The ‘anti-social yob’ tearing up society

This article is over 17 years, 6 months old
AS NEW Labour’s lies and betrayals mount up around him, Tony Blair has responded by lurching even further to the right.
Downloading PDF. Please wait...
Saturday 24 July 2004

AS NEW Labour’s lies and betrayals mount up around him, Tony Blair has responded by lurching even further to the right.

His “five-year plan” to “crack down on crime”, unveiled this week, is a desperate attempt to shift attention away from the government’s failings. It was a chilling echo of the worst of Tory scapegoating in the week that Blair marked ten years as Labour leader.

We saw a taste of what’s to come with New Labour’s disgraceful campaign in the recent by-election in Birmingham Hodge Hill.

Blair now shamelessly parrots the bigoted rhetoric of the Daily Mail. He attacks the “1960s liberal social consensus” and people with “different lifestyles” for spawning a generation “without any residual moral sense”.

But if any decade should be blamed for tearing up society’s fabric, it is the 1980s. That was when Margaret Thatcher launched her neo-liberal project to claw back every gain that workers had won since the war.

The unions were violently attacked, manufacturing industry was decimated, and every aspect of the public sector was relentlessly run down. Blair is proud to be seen as Thatcher’s heir and successor.

Gordon Brown’s plans to axe 104,000 civil service jobs are a continuation of these Thatcherite attacks. Each one of those jobs lost will dislocate a family, sow more insecurity and drain away hope from ordinary people.

Blair talks as if crime is rising dramatically, but all the figures show that, for most crimes, the rates are static.

New Labour’s worship of capitalism has created a world of insecurity, worsening wages, people struggling to get by and rampant inequality.

That is what leads to “anti-social behaviour”. Blair wants us to persecute teenagers who hang around on street corners when they have nowhere else to go.

Millions of people feel that they are on the fringes of society. Some react in desperate ways to their lives being torn apart.

This was shown dramatically on TV last Sunday in a documentary about the poverty and drugs that have laid waste to former mining towns. The same devastation can be found in former steel towns and inner city areas where jobs have been destroyed.

New Labour’s proposals to “get tough on crime” will do nothing to help anyone. They will simply fuel the atmosphere of fear, despair and hatred that create the problems in the first place.

Blair says he wants “summary justice through on the spot fines”, “naming and shaming of persistent offenders” and a “massive increase in drug testing”.

His vision of “society” is one held together by fear, a land where we spy on each other, distrust each other and shop each other to the authorities.

Nobody wants to live in such a paranoid nightmare. But people’s fears and insecurities are very real. New Labour is preying on those fears in a final shabby attempt to shore up its splintering support.

That’s why the vote for the Respect coalition in the 15 June by-elections is so significant. Even mainstream political pundits have been forced to sit up and take notice of a new force emerging on the left.

We need to build an alternative to this discredited capitalist project that breeds greed and misery. 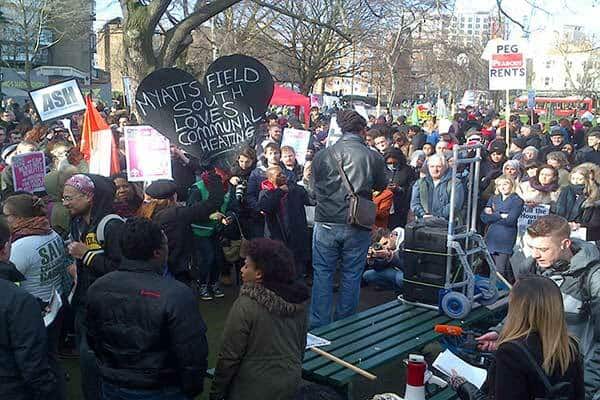 Take back housing from the Tories and rich

Equal pay: the fight 40 years on

The week that politics changed