This article is over 9 years, 0 months old
Yet again former Tory prime minister Margaret Thatcher proved her spite—by not dying at the end of 2012. That wasn’t the only bad news.
Downloading PDF. Please wait...
Monday 31 December 2012

Yet again former Tory prime minister Margaret Thatcher proved her spite—by not dying at the end of 2012. That wasn’t the only bad news.

David Cameron put his crackdown on welfare at the centre of his New Year message. He said that 2012 was a “tough” year—for us, not him—but claimed the government remained “on the right track”. Like Thatcher, he is apparently not for turning.

Yet in reality she was—and he is too. The release of documents from Thatcher’s government under the 30 year rule reveal some lessons for today.

Then as now the Tories were unpopular as they pushed through cuts. Then as now they turned on the weakest and most vulnerable. They claimed that they didn’t want to destroy the welfare state. But they were lying.

Thatcher declared that she supported the NHS. The documents show she wanted to end it and move everyone to private healthcare. Cameron now claims that he has ringfenced the NHS from the cuts. He is lying.

Then as now the Tories presented themselves as tough and determined. But the Iron Lady persona of Thatcher was a myth to make the Tories seem unbeatable. Even in her so-called finest hour of the Falklands War she prevaricated over what to do in case it offended the US bosses.

Importantly the plan for the abolition of the welfare state was scrapped. The Tories were terrified the plan would spark a revolt that would bring them down.

The battles that took place at key moments throughout Thatcher’s 11 years could have broken the Tory government. And for all the bluster they knew it. Our side failed to win not because of Thatcher’s strength, but because of the cowardice of Labour and union leaders.

Steel strikes in 1980 and the Great Miners’ Strike of 1984-85 threw Thatcher’s government into crisis. On each occasion Labour and trade union leaders betrayed workers’ courage and determination. In the end it was mass protest and riot by ordinary people that brought Thatcher down.

Today the Tories are far less confident than they appear. The establishment is continually lurching from crisis to crisis. The Tories have fallen out with their friends in the media. Their relations with their pet boot boys in the cops are a mess.

They all still agree that we should pay for the crisis. But there is growing anger and bitterness at the attacks from the toffs. Now as then they can beaten.

When workers leave home in the morning, they should resent “the closed blinds of their next door neighbour sleeping off a life on benefits”—at least that’s what Tory chancellor George Osborne wants us to think.

It’s the argument the Tories wheel out again and again over benefits. Why should unemployed people get anything that employed people don’t? They say that poor families shouldn’t be allowed to live in the wrong parts of London, or have the wrong number of children.

We should see this for what Osborne makes clear it is—an attempt to divide working class people from their neighbours. The Tories hope that as the economy sinks into the mire and the cuts start to bite, we will turn on each other, fighting over the scraps that are left.

The big lie that backs this up is the idea that living on benefits is a “lifestyle choice”. But the idea of a permanently unemployed “underclass” is just a nasty myth.

Most working class people have periods in work punctuated by occasional unemployment. And no one spends their life on the meagre dole because they’re lazy. Fighting the blizzard of new rules to keep your benefits is a job in itself.

People are unemployed for the simple reason that there aren’t the jobs out there to get. Why should they be punished for that? 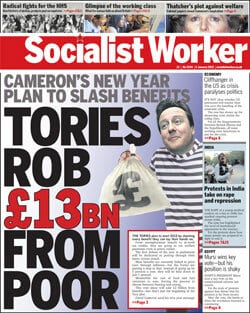