This corrupt and shameless occupation

This article is over 16 years, 1 months old
US vice-president Dick Cheney stepped up White House attacks on critics of the Iraq war this week. He declared that politicians who say Americans were sent into battle based on a lie are engaging in "revisionism of the most corrupt and shameless variety."
Downloading PDF. Please wait...
Saturday 26 November 2005

US vice-president Dick Cheney stepped up White House attacks on critics of the Iraq war this week. He declared that politicians who say Americans were sent into battle based on a lie are engaging in “revisionism of the most corrupt and shameless variety.”

The US is found to have used chemical weapons on civilians in Iraq. Death squads are operating with official sanction and running their own torture centres where detainees have their skin flayed from their bones.

Previously detainees have been rescued from the interior ministry where they were being abused. Corpses are routinely dumped, blindfolded, in Baghdad.

Meanwhile a deal is being pushed through where US multinationals will be paid to extract oil from Iraq, thus undermining every agreement signed by oil producing countries.

The only possible “revisionism” would be to cloak this corrupt and shameless war in the mantle of respectability.

Each day the charge sheet against Cheney and the architects of this criminal war grows longer. Let’s help bring them to book by joining Cindy Sheehan and others at the International Peace Conference in London on 10 December.

For them the most striking feature is how multiracial it is. But what is also of interest is that its starting point is strikingly different from their own organisations’.

Rifondazione in Italy came from the biggest Communist Party in Western Europe. The new Left Party in Germany was initiated by trade union leaders and prominent party members expelled from the Social Democrats.

In Britain the weakness of the left, the trade unions and the student movement meant opposition to neo-liberalism has been channelled in a different direction, through the Stop the War Coalition and the networks it has created.

Respect is largely based on people drawn into political activity by the war. The party will have to develop in different from the small group politics to which the left has been restricted.

While remaining active in the unions, it is crucial to immerse Respect in the anti-war movement and in the campaign networks being born round housing, health, education and pensions. The new radical left in Europe differs in origins, but we all face the same challenge.

That the man who even a tame inquiry found partially responsible for the massacre of 2,000 Palestinian refugees can be considered a middle of the road candidate says everything about Israeli politics.

Prime minister Ariel Sharon has quit his Likud party in a bid to head up a coalition after new elections next year.

The turmoil in Israeli party politics is in large part due to the resistance by the Palestinian people. Israel’s political establishment is divided over how to deal with that resistance. But they are united in refusing the Palestinians justice. Israel will continue its repression, and international solidarity with the Palestinians must be redoubled. 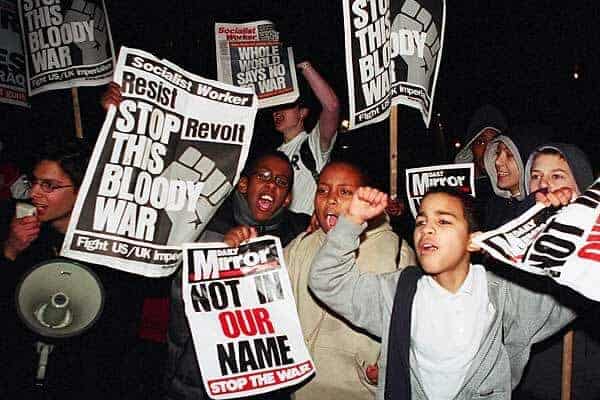 Seize the chance to make history

Killers meet as the slaughter continues

Britain and the US are losing the war