This is our chance to take on the Tories

The mass movement that emerged around the fight for Scottish independence was driven by working class anger. This rage is not unique to Scotland.

Yes voters placed an out of touch Westminster elite and the dismantling of the NHS as their top reasons why they were voting for independence.

This bitterness was accumulated over the last 30 years.

Working class people have only experienced ever deepening inequality while the rich have kept on getting richer. From Margaret Thatcher’s Poll Tax through to the bedroom tax ordinary people have been forced to carry the burden created by those at the top.

We can’t just wait for the general election and Labour won’t provide an alternative to austerity.

We need to fight now. The strikes and protests in October will be an opportunity to harness the anger that working class people feel.

This weekend protesters were set to demonstrate outside both the Tory and Ukip conferences to demand an end to the scapegoating of migrants and the rule of the rich.

NHS workers are set to strike on 13 October after health secretary Jeremy Hunt said they did not even deserve a 1 percent pay rise.

This will be a day before a strike by local government workers and in the same week as protests for better pay in London and Glasgow. 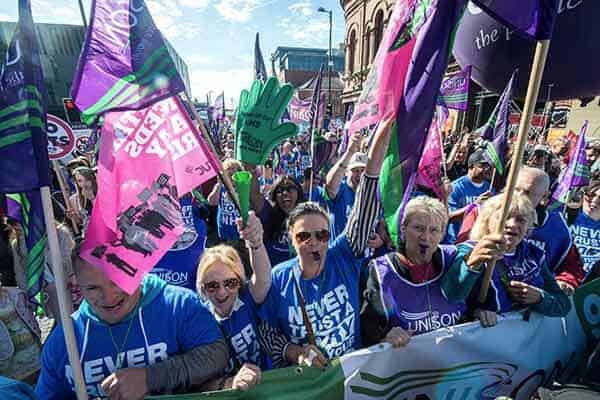