This article is over 12 years, 4 months old
Media claims the Labour party is too loyal to its trade union founders are upside down
Downloading PDF. Please wait...
Tuesday 16 March 2010

The Daily Mail claimed this week that, “Brown daren’t confront the BA union bullies. The reason? His party’s totally sold out to the red barons.”

What planet are they living on? The BA dispute has seen Tory after Tory lining up to froth at the mouth at the prospect of cabin crew standing up to a nasty employer.

Even when Gordon Brown joined in and attacked workers, the media and the Tories still whined that the unions control Labour.

The Unite union has given £11 million to Labour since Brown came to power. The unions are now paying over 90 percent of the party’s bills.

But the tail is wagging the dog. The government has intervened in the dispute on the side of the bosses. And that is how it has been throughout Labour’s time in office.

Some union leaders have prevented strikes challenging the government, in return for absolutely nothing.

As Tony Woodley, joint general secretary of Unite, said two years ago, “There is no point backing a Labour Party that does not support Labour policies.” He perhaps did not realise the truth of his words.

We need to increase the pressure on the union leaders to back their members rather than a party that attacks them. 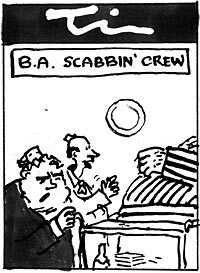