We can stop austerity—and change the world

This article is over 9 years, 8 months old
Election results in Greece and France have sent our rulers into a panic. They insist that austerity—savage programmes of cuts, job losses and privatisation—is the only cure for Europe’s ailing economies.
Downloading PDF. Please wait...
Tuesday 08 May 2012

Election results in Greece and France have sent our rulers into a panic. They insist that austerity—savage programmes of cuts, job losses and privatisation—is the only cure for Europe’s ailing economies.

But now it seems that ordinary people are refusing to take their medicine.

In Greece voters flocked to parties that opposed the austerity being imposed on the country.

The new French president Francois Hollande was similarly elected on an anti-austerity ticket.

Workers are right to refuse to pay for an economic crisis created by banks and corporations.

And our rulers have good reason to fear what happens when the people refuse to bow down and accept austerity.

Here in Britain hundreds of thousands of public sector workers were set to strike on 10 May against pension cuts.

And the local elections last week saw a major swing against the ruling Tories and Liberal Democrats.

The resistance here has not yet reached the levels seen on the streets of Greece.

But ordinary people here and across Europe are clearly getting organised to fight austerity.

We can stop the coalition’s cuts if we raise our level of strikes, protests and organisation.

The Liberal Democrats are already falling apart and now the Tories are turning on each other.

But mass strikes and protests can do more than just bring down governments that are pushing through cuts.

Hollande—and his equivalents here in Ed Miliband’s Labour Party—do not offer any significant alternative to austerity.

Hollande wants to renegotiate various economic treaties, but he is committed to following the European Union’s budgetary rules.

Part of the problem is that even left wing parties frame the issues in terms of growth and fixing “our” economy.

This ignores the fact that crises and recessions are part of the global capitalist system.

There is no “normal” growth we can all get back to.

The people striking and protesting have the potential to create a new kind of society.

They can build a world that isn’t based on the blind pursuit of profits and the rich ripping off the poor.

But more than that—it is necessary if we want a world finally free from poverty, recession and war.

Under this system every integration model fails 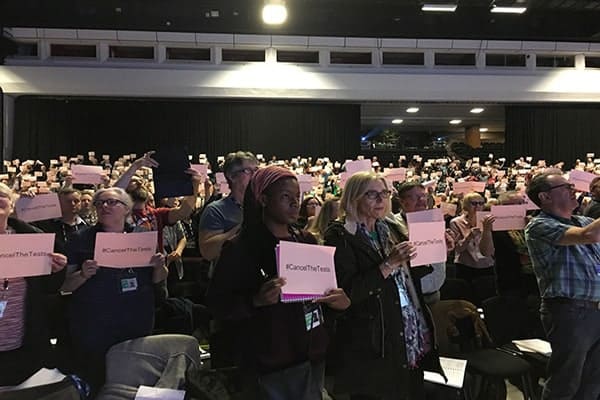 A left exit from the European Union is possible