We have power to stop the warmongers

This article is over 19 years, 10 months old
IT WON'T just be George Bush choking on his pretzels after the events of last week. Three months ago Bush, Blair and their media supporters were declaring victory after victory.
Downloading PDF. Please wait...
Saturday 23 March 2002

IT WON’T just be George Bush choking on his pretzels after the events of last week. Three months ago Bush, Blair and their media supporters were declaring victory after victory.

They claimed that all opposition in Afghanistan had been militarily defeated. They also said that the anti-capitalist movement that had been growing powerfully for two years had been hurled backwards after 11 September. Their comfortable illusions have been shattered.

The fighting is still continuing in chaotic and long-suffering Afghanistan. British troops have been rushed to the front to replace humiliated US forces. Meanwhile in Barcelona last weekend 500,000 people took part in the biggest anti-capitalist protest we have yet seen (for eyewitness accounts see page 5). The main slogan of the demonstration was ‘Against a Europe of capital and war’. This was a direct challenge to everything that Blair, Bush and their right wing friends stand for.

Even among Labour MPs, discontent with Blair is accelerating sharply. When trade union leaders call for action they get a tremendous response from rank and file union members. The teachers’ strike and demonstration in London last week were evidence of the ‘we’ve had enough’ feeling that now touches millions.

Postal workers are itching to hit back at the bosses who deny them decent pay and a government that is pressing ahead with privatisation. Even very ‘loyal’ trade union leaders such as John Monks are forced to criticise Blair’s right wing alliance with Berlusconi and Aznar. Big changes in society do not happen in a day or a week.

But last week underlined how the ground is shifting under the pro-business, pro-militarist ideas pumped out by all the major parties. With all the difficulties our side still faces, Barcelona was a great day and a signal of something much wider. On a smaller scale, so was the London teachers’ march.

Now we have to seize the opportunity to push things further and deepen the process.

Bring all the issues together

THE RISING mood is an opportunity and a challenge for us all. The 1,000-strong Socialist Alliance trade union conference last weekend showed the potential to deepen the fightback in the workplaces. The Stop the War Coalition has launched a petition against war on Iraq, and CND has called an anti-war demonstration for 30 March.

Protesters will confront US war criminal Henry Kissinger when he speaks to the Institute of Directors on 24 April. A week later people will take to the streets on May Day. The local elections in England are less than six weeks away. The deadline for nominating candidates is rapidly approaching. The Socialist Alliance is standing hundreds of candidates, and leafleting, campaigning and canvassing in all the major cities.

All of these campaigns involve people who are becoming politically active for the first time, bringing a new spirit of resistance to the movement. Everyone can do something. As the Barcelona demonstrators chanted, we are against both the rule of big business and a world of war. We are against the privatisation of the Post Office and against an attack on Iraq. We are for justice for the Palestinians and for a powerful Socialist Alliance. Socialists need to bring all these issues together.

Socialist Worker reports on all these fights, and we encourage all of our readers to get involved in strengthening the growing mood.

Get Socialist Worker in your newsagents

ONCE AGAIN in Socialist Worker this week you can read reports of events that nobody else in the British press has covered. The pictures that we print from Barcelona have not appeared in any other publication in Britain.

Where else can you read the accounts of 1,000 trade unionists discussing and debating the unions’ political funds? The only other paper to show the size of the teachers’ protest in London last week was the Tory Daily Telegraph. But the only paper in your newsagent to allow teachers to express why they struck is Socialist Worker.

Get Socialist Worker every Thursday by filling in the coupon and giving it to your newsagent. Your newsagent could even deliver it with your morning papers. You could also suggest they order a few extra copies to display on the shelves. 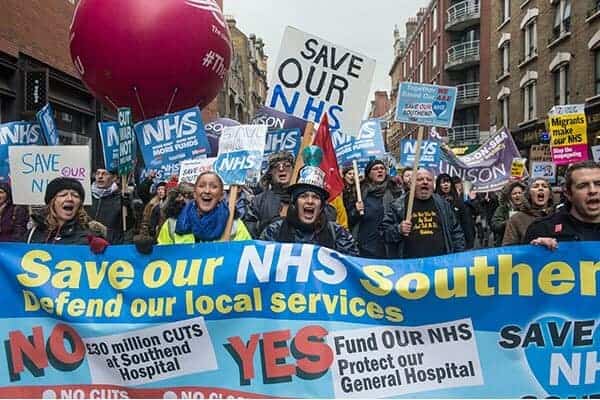 The vicious spirit that moves Tony

The Tories have not gotta lotta bottle