Some insightful quotes on the News International scandal

‘Discerning people should not be impressed by the process familiar to me and other victims of it, of hostile media solemnly citing law professors and retired prosecutors and sources to comment on the Murdochs’ legal problems’

News of the World assistant news editor Greg Miskiw in 2002

‘He has gone for lunch. I don’t know if he will be in a fit state to talk to you when he gets in’

Wife of veteran News International legal manager Tim Crone to journalists outside his house. He left the firm “abruptly” last week after 26 years

‘Ethics to me is very important. I will not tolerate to deal with a company that has a lady or a man that has any sliver of doubt on her or his integrity’

Cameron must go! - they’re all in it together 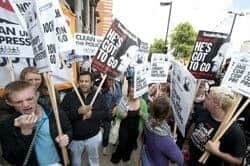 Murdoch's empire is skewered after grilling

More News of the World links to the police

Did Boris Johnson help plot against News of the World journalist?

The crisis ain't in the bag

Hacking issues at the Daily Mail

‘Kicking down doors is probably one of our favourite things’

‘Wonderful news. Many congratulations to Boris Johnson and Carrie Symonds’

‘There are more important things than living’