The Labour election, the rich

This article is over 11 years, 10 months old
‘David. What have I done to David?’
Ed Miliband after winning the Labour leadership contest
Downloading PDF. Please wait...
Tuesday 28 September 2010

‘David. What have I done to David?’
Ed Miliband after winning the Labour leadership contest

‘Don’t worry about me, I’ll be fine’
David Miliband. We weren’t

‘This is bound to hurt’
Vince Cable

‘He has no democratic mandate’
Tory Baroness Warsi on Ed Miliband’s union backing. She sits in the unelected House of Lords

‘To an average person who has an average house, it seems a lot. But this is our head of state in her headquarters and a high standard has to be maintained’
A Buckingham Palace spokesperson on the queen spending £96,000 on chandelier cleaning

Quotes of the week 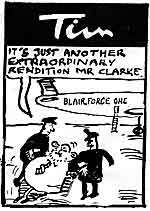 ‘Kicking down doors is probably one of our favourite things’

‘Wonderful news. Many congratulations to Boris Johnson and Carrie Symonds’

‘There are more important things than living’