Most of the media and mainstream politicians don’t think much of ordinary people.

MPs talk of how important they are because the rest of us are too uninformed to make big decisions ourselves.

Even in a general election we’re told only wealthy politicians and unelected bureaucrats know how to run society.

But 100 years ago the Russian Revolution proved that all wrong.

In 1917 masses of downtrodden people organised to look after themselves, run their own workplaces—and eventually take charge of society.

This was done through the “soviets”—councils based in working class districts made up almost entirely of workers and soldiers.

When the Tsarist regime collapsed, the capital city Petrograd had fallen to the revolution. Workers and soldiers, through the soviets, controlled the city.

Even capitalist politicians had to defer to the soviets.

The US socialist journalist John Reed, who reported from Russia during the revolution, wrote that the politicians “had no connection with the revolutionary masses.

“They were obliged to appeal to the representatives of the workers and soldiers—in other words the council.”

Each soviet was made up of delegates elected by workers based in factories or soldiers’ garrisons.

Many followed the example of the soviets in Petrograd.

There, some 1,200 delegates made up the Petrograd Soviet—and these came from smaller soviets based in each district.

They met every two weeks and elected a central executive committee of 110 members. Twice a year soviets across Russia would send delegates to an “All-Russian Congress”.

This giant soviet meant workers and soldiers could debate and organise the revolution together. Any group of workers could organise and demand representation.

The soviets created one of the most democratic and free societies the world has ever seen.

The atmosphere of these meetings shines through in the records of those present.Historian Sukhanov described one of the first meetings of the Petrograd soviet.

He wrote, “The Hall had never seen such an invasion or such people.

“Cigarette ends were already scattered among the nice clean desks. Men sat in their caps and fur coats. There were glimpses here and there of rifles and other military equipment.” 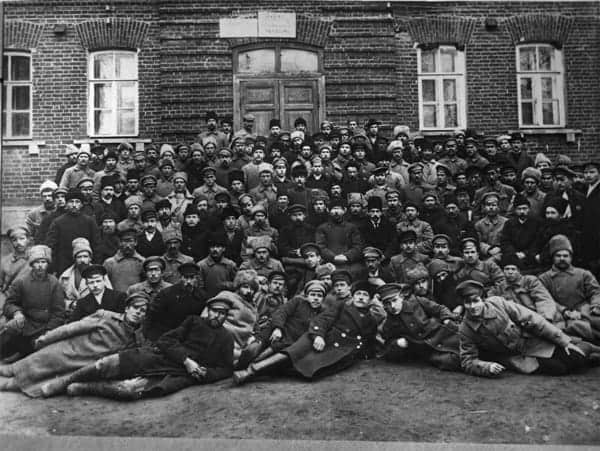 Workers, peasants and soldiers would share their experiences of revolution.Sukhanov wrote that visiting peasants “uttered their stormy, heroic hymns to the revolution.

“They excited the audience, took possession of it, and somehow illuminated it, welding it into one by the heroic emotion of the revolution.”

One visiting soldier told the Petrograd soviet that when they heard the news of the revolution, “We began yelling ‘Hurrah!’ and singing.

“Well! The Germans were only about as far away as that—or perhaps a bit more.

“They heard us and yelled over, ‘Hey, what have you got over there?’ We yelled back,‘We have got a revolution! No more Tsar!’”

Throughout most of 1917 the soviets rivalled the power of Russia’s capitalist Provisional Government that had replaced the Tsar.

The revolutionary Bolshevik party demanded “All power to the soviets”. They saw the soviets as the basis for a new kind of socialist society where power was based in workers’ organisation.

They called for insurrection to destroy the Provisional Government, leaving the soviets in full control—something workers achieved in October.

Some people today say that the soviets were taken over and used by the Bolsheviks to crush genuine workers’ democracy.

But the soviets created one of the most democratic and free societies the world has ever seen. It was only later, under Joseph Stalin’s counter revolution, that power was taken by a growing bureaucracy.

Decisions made by the central committee were valid throughout Russia. But, as John Reed wrote, in local areas the district soviets were in charge and “their authority is practically supreme”.

That was because “the local soviets created the central government”.

This meant that delegates could be recalled immediately if workers weren’t happy with them.

Delegates could be replaced if they didn’t stick to the programme they were elected on.

So the make-up of the soviet government could change very rapidly depending on the decisions of workers.

That’s why the Bolshevik control in the soviets would have been impossible if the majority of workers didn’t support them.

In December 1917, shortly after the soviets had taken control, a demonstration of supporters of the previous government was fired on by the soviets’ militia.

Many workers saw this as a mistake. Within 12 hours several Bolshevik delegates to the Petrograd soviet were recalled. They only got back weeks later when support for the Bolsheviks returned.

The gains of the Russian revolution were rolled back by a bureaucratic counter-revolution with Stalin at its head. But the soviets give us a vision of what genuine democracy can look like.

Those who claim that such a society is impossible are often those same people who tell us we can’t have a say in our own society today.

Workers organised in the factories and took control

Alongside the soviets, workers had to take control of their own workplaces too.

Factory committees also sprung up in many workplaces shortly after the February Revolution.

Some bosses fled during the February Revolution, or simply disappeared with the government if the factory was publicly owned.

In other factories, bosses stayed on but tried to sabotage the revolution with lockouts or by disrupting production.

So workers had to organise to take control of production within the factories themselves.

Factory workers elected delegates to the committees from among themselves. 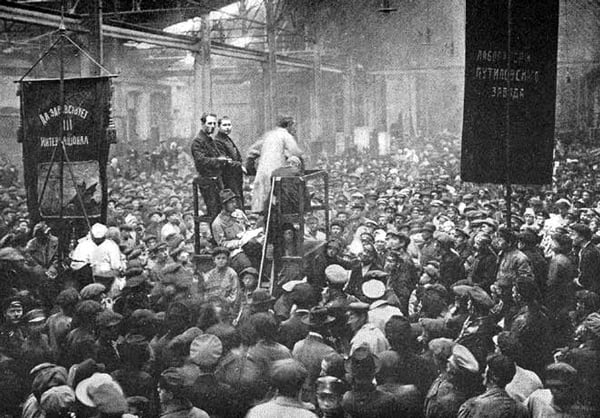 A meeting of a factory council at the Putilov ironworks

These were key to winning demands such as the eight hour working day.

But their power could be much more far reaching.

In some factories the workers were even in control of the hiring and firing of workers.

They oversaw everything that went in and out of the factory gates.

Where workers were in control, they employed the same “experts” to help them run the factories as the bosses—or they quickly learned how to do it themselves.

US socialist jouranlist John Reed wrote how in one textile mill, workers learned to trade the cloth they made with others in the city.

One Petrograd boss warned his workers that he would shut his torpedo factory down.

This was because they didn’t have enough of a certain part, which was made at a factory just across the river.

“Comrades, if we don’t get the tubes in two days our torpedo department will have to close.

“Four hundred boys will be out of a job.”

The committee arranged it so that the parts went straight to where they were needed, and the factory stayed open. 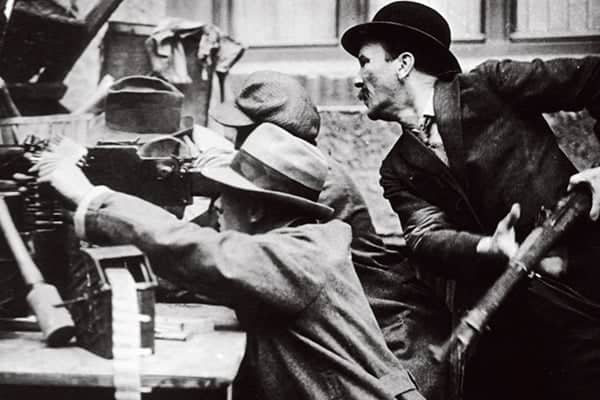 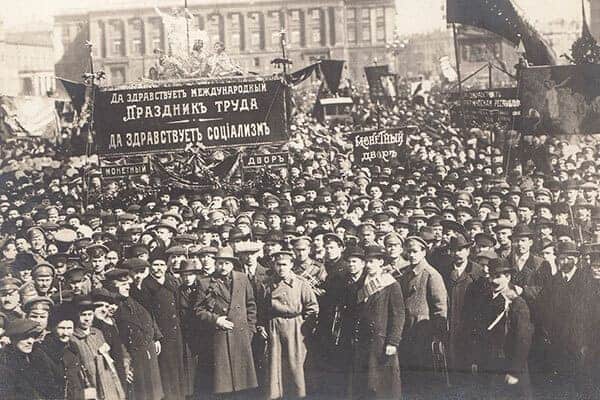 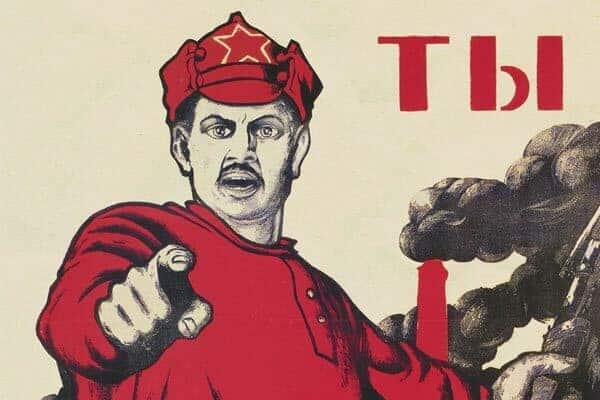 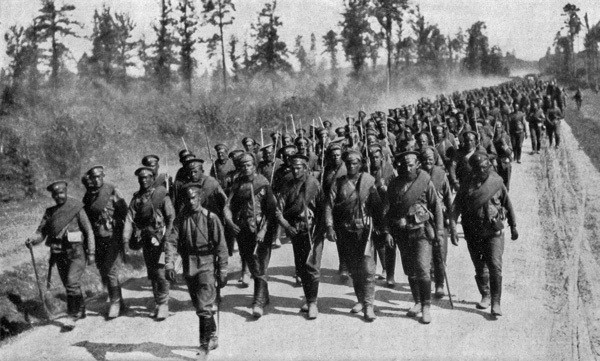 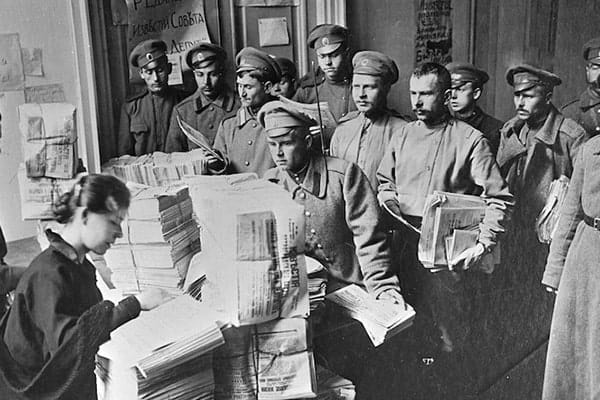