This article is over 13 years, 1 months old
The escapades of Somali pirates made headlines last week. But the media has ignored the injustice behind the phenomenon, writes Simon Assaf
Downloading PDF. Please wait...
Tuesday 25 November 2008

When the Asian tsunami of Christmas 2005 washed ashore on the east coast of Africa, it uncovered a great scandal.

Tonnes of radioactive waste and toxic chemicals drifted onto the beaches after the giant wave dislodged them from the sea bed off Somalia.

Tens of thousands of Somalis fell ill after coming into contact with this cocktail. They complained to the United Nations (UN), which began an investigation.

“There are reports from villagers of a wide range of medical problems such as mouth bleeds, abdominal haemorrhages, unusual skin disorders and breathing difficulties,” the UN noted.

Some 300 people are believed to have died from the poisonous chemicals.

This meant they could use the coast as a toxic dumping ground. This practice became widespread as the country descended into civil war.

Nick Nuttall of the UN Environment Programme said, “European companies found it was very cheap to get rid of the waste.

“It cost as little as £1.70 a tonne, whereas waste disposal costs in Europe was something like £670 a tonne.

“And the waste is of many different kinds. There is uranium radioactive waste. There is lead, and heavy metals such as cadmium and mercury. There is also industrial waste, hospital wastes, chemical wastes – you name it.”

But despite the evidence uncovered by the tsunami, an investigation into the practice of toxic dumping was dropped. There was no compensation and no clean up.

In 2006 Somali fishermen complained to the UN that foreign fishing fleets were using the breakdown of the state to plunder their fish stocks. These foreign fleets often recruited Somali militias to intimidate local fishermen.

Despite repeated requests, the UN refused to act. Meanwhile the warships of global powers that patrol the strategically important Gulf of Aden did not sink or seize any vessels dumping toxic chemicals off the coast.

So angry Somalis, whose waters were being poisoned and whose livelihoods were threatened, took matters into their own hands. Fishermen began to arm themselves and attempted to act as unofficial coastguards.

They began to seize ships in late 2005. These were released after a ransom was paid. Among them were cargo vessels, luxury cruise liners and tuna fishing boats.

Januna Ali Jama, a Somali pirate leader, explained that their actions were motivated by attempts to stop the toxic dumping.

He said that the £5.4 million ransom they demanded for the return of a Ukrainian ship would go towards cleaning up the mess.

Ali Jama said the pirates were “reacting to the toxic waste that has been continually dumped on the shores of our country for nearly 20 years.

“The Somali coastline has been destroyed. We believe this money is nothing compared to the devastation that we have seen on the seas.”

But the nature of this piracy soon began to change. Members of the Somali government, who were part of the then Western-backed Transitional Federal Government (TFG), started to get involved.

They transformed the piracy operation into a multi-million dollar industry that funded their lavish lifestyles.

The TFG was ousted during a popular rebellion in July 2006 led by the Union of Islamic Courts. Later that year the US backed Ethiopia’s invasion of Somalia to drive the Islamic Courts out.

This provoked an insurgency labelled by some as the “third front” of the “war on terror”.

The US became embarrassed when it emerged that its allies in the TFG were deeply involved in piracy. As concerns grew for the safety of ships heading towards the Suez Canal, global powers began to take notice.

Indian and US warships began to sink Somali fishing boats if they sailed too close to cargo vessels or trawlers. These warships transformed Somalia’s coastal waters into a “free fire zone”. When a giant Saudi oil tanker was seized, these powers declared all-out war on the pirates.

British foreign minister David Miliband recently boasted that Britain would be taking the lead in cracking down on the pirates.

The Royal Navy will take command of a European fleet of warships as part of “Operation Atalanta”, he said.

The target will be the Somalis – not the vessels dumping waste or the illegal foreign fishing fleets.

As global powers dispatch their warships to the Somali coast, the problems that caused this outbreak of piracy remain unresolved.

European, US and Asian ships will continue to dump hazardous waste and plunder coastal fishing stocks – leading to continuing misery for Somalis. 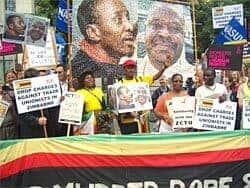 Zimbabwe: Mugabe cracks down on opposition

Zimbabwe - What's at stake in the election?