This article is over 12 years, 4 months old
A US airstrike on a suspected Al Qaida leader, Saleh Nabhan, in Somalia has triggered a new round of fighting in the east African state.
Downloading PDF. Please wait...
Tuesday 22 September 2009

A US airstrike on a suspected Al Qaida leader, Saleh Nabhan, in Somalia has triggered a new round of fighting in the east African state.

The US accuses Nabhan of being behind a string of attacks on US and Israeli targets in the Horn of Africa.

Somalia is run by rival factions that emerged following the failure of the Western backed Ethiopian occupation.

The Shabab militia, which controls the capital and most of the south, wants to oust its former ally the Union of Islamic Courts.

The Islamic Courts briefly ran the country after a popular rebellion, but were ousted by the Ethiopian army in December 2006.

The US attack comes as Somalia faces dangerous food shortages. The United Nations estimates that some 3.6 million people face hunger, including 1.3 million displaced by the war. 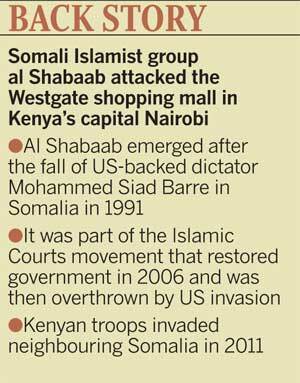 Nairobi shopping mall horror is the high price of war