This article is over 18 years, 10 months old
IF YOU believed the Daily Mail you would think there is a witch-hunt against middle class students being rejected by top universities simply because they are middle class. 'Felicity had ten A grade GCSEs and three A grade A-levels. So why was she rejected by Bristol University?' screamed the front page of one edition.
Downloading PDF. Please wait...
Saturday 15 March 2003

IF YOU believed the Daily Mail you would think there is a witch-hunt against middle class students being rejected by top universities simply because they are middle class. ‘Felicity had ten A grade GCSEs and three A grade A-levels. So why was she rejected by Bristol University?’ screamed the front page of one edition.

‘The first signs of the backlash against the government’s social engineering policy emerged today,’ it rants. ‘Leaders of the country’s top schools revealed that they would be urging their students to black Bristol University.’ Let’s clear some things up. There’s no debate that the education system stinks, and is unfair and biased.

At my college, which is predominantly working class and the majority of students are black and Asian, several people have been rejected by their first choice universities.

Colleges have always rejected people – it’s one of the stresses of applying to university. But working class students have always had the most rejections. And let’s not forget the institutional racism of some universities who blacklisted students if their names sounded ‘foreign’. There is no discrimination against those from private schools. The system is designed so that they succeed and working class people fail so they are ‘kept in their place’.
Chris Leary, Salford

WHEN THE Macpherson Report into the death of Stephen Lawrence was published in February 1999, it was accompanied by a solemn promise by the government that it would mark a ‘step change in our attitude to race relations’. Education was to be one of the key areas where the negative impact of institutional racism would be rooted out.

Four years down the road, the outcome of this ‘commitment’ is a 3 percent fall in the GCSE results of black boys. These figures are depressing but should come as no surprise. The real problem rests with the competitive school system that is obsessed with selecting and testing children.

The pressure on schools to improve their position in examination league tables leads them to marginalise and exclude those children who are not expected to gain high grades.

This inevitably leads to the stereotyping of working class children who lack the privileged access to books and extra tuition. Black children often find themselves at the very bottom of this index of discrimination.

Ofsted, the government’s own schools inspectorate, initially tried to suppress a report that highlighted these points. And the government has simply refused to address these issues, preferring instead to introduce a half-baked citizenship curriculum and further selection through the promotion of faith schools.

Meanwhile a website of race equality materials has laid dormant for 18 months. Recent attacks on so-called ‘macho idiot rappers’ have also signalled an attempt to deflect criticism away from government policy.

The finger of blame for educational underachievement has instead been pointed at musicians who, supposedly, encourage an ‘anti-education’ ghetto mentality amongst black kids. Such claims are ludicrous but reflect the wider racist backlash that includes the scapegoating of refugees and asylum seekers.

This is yet another example of the shameless hypocrisy of a government whose drive to war is the supreme example of macho idiocy.
Brian Richardson, East London

Views on the GMB leadership election

AS A socialist in the GMB union I will be backing Paul Kenny in the election for general secretary. The GMB needs democracy, with power passing to ordinary members.

The other candidate, Kevin Curran, calls himself ‘sensible Labour’ and wants to maintain a close link with the Labour Party. Downing Street clearly hope Curran will win, although they dare not say so too loudly in case it puts off voters! If Kenny wins it will be a blow to Blair and a chance to build a more democratic union.
Henry Rajch, Barnsley

I WAS surprised that Socialist Worker recommended a vote for Paul Kenny in the upcoming GMB general secretary elections.

Like many candidates in high profile union elections at the moment he may be trying to put distance between himself and Tony Blair. But is this not the same Paul Kenny who worked to deliver block votes for Frank Dobson against Ken Livingstone in the London mayoral elections? He has also pulled the GMB out of united strike action in the council’s London weighting dispute.

I’m a member of Unison, not the GMB. But in London Kenny has made his mark by aggressively campaigning against other unions rather than trying to build unity against New Labour. Is he really a candidate that socialists can support?
John McLoughlin, East London

THE RECENT ‘open’ verdict in the inquest into the death of Jason McGowan has vindicated our three-year campaign for justice. I’d like to thank the Socialist Workers Party and the Anti Nazi League, especially in Telford, for the effort they put into our campaign.

I’d also like to thank the Scottish TUC, the Unison union, the National Assembly Against Racism, the Civil Rights Movement and Maxie Hayles of the Birmingham Attack Monitoring Unit. We are going to continue the campaign for justice for Jason and Errol.
Clifford McGowan, Telford
Send donations to Errol Memorial Fund, 50 Kingsland, Arleston, Telford, Shropshire TF1 2LF.

Who is paying for charge?

THE INTRODUCTION of congestion charging in London has been seen as a success in some quarters. Other cities are now considering similar schemes. That view is not shared by people I work with.

Although firefighters have rightly been granted exemption while on duty, control officers and other fire brigade workers still have to pay. Despite Ken Livingstone’s statements to the contrary, these low paid workers are paying the price for easing congestion.

Single parents are forced to spend even more time away from their children by arriving at work early and leaving late to avoid the charge. Even workers with conditions such as claustrophobia who cannot use public transport are not exempt.

Staff working nights have to pay the charge twice for one duty. These workers have nothing in common with the Mr Toads of the Tory Party who demand the right to drive their posh cars wherever they like. The real solution to congestion is an integrated transport policy under public ownership. This could be funded by increased taxation on the rich.
Tony Phillips, Branch secretary, London Fire Authority Unison (personal capacity)

SPINNEY HILL Labour Party in Leicester held a public meeting against the war last weekend. Labour MP Jim Marshall told the audience of 100 people that he would not support a war even if a second UN resolution was passed.

Six local Labour councillors also expressed opposition to war. There was much frustration about how the Labour leadership is ignoring the public mood. The meeting passed a resolution which supported direct action against the war.
Mike Thompson, Leicester

We pay more for less

THE LIBERAL Democrat and Tory led council in Lambeth, south London, recently agreed to raise the council tax by 22.8 percent – £185 a year on average. This is the highest increase in the council’s history. Vital social services, including reductions in day care for older people and adults with learning disabilities, are going to be axed.

Whilst Lambeth council proudly displays its vision statement as ‘putting people first’, it seems insanely ironic that its citizens will be paying more council tax for the pleasure of losing services.
Barbara Capps, South London

US wants to rule world

THE REAL reasons for the Bush administration’s drive to war against Iraq can be found in an organisation based in Washington DC called the Project for the New American Century. Its aims are US hegemony for the next 100 years, ‘full spectrum dominance’ and eventual ‘liberation’ of China.

Who were the founding members of this project launched in 1997? None other than Donald Rumsfeld, Dick Cheney, Paul Wolfowitz, Richard Perle et al.
Dave Taylor, Hampshire

THE INEVITABLE consequence of war against Iraq will be the altering of the regional balance of power vastly in favour of Israel. Israel continues to disregard existing UN resolutions. The US is only interested in enforcing UN resolutions in a selective manner.

Such behaviour exhibits the deep contempt the US has towards the Arab and Islamic world.
Yamin Zakaria, by e-mail

Let’s all protest at the big ‘M’

I READ your paper for the first time last week and found much that I agreed with. A protest that would marry the concerns of the anti-war movement with those of anti-globalisation protesters would be the co-ordination of rolling world-wide peaceful pickets of McDonalds restaurants.

There are many people who couldn’t get to the big marches, but who would see the sense in congregating at their local symbol of corporate America – the big yellow ‘M’.
A supporter, Ilkley

IT HAS become clear that the BBC really does believe that politics only happens in the corridors of power. If you were to believe the broadcasts, the whole debate around the war has been almost solely between diplomats at the UN, and in parliament and the White House.

The idea that ordinary people have any genuine views has been at best marginalised and at worst completely ignored.
Alan Gibson, by e-mail

Day of the jackal

MUCH HAS been written about Blair’s life of a lapdog or poodle power. He’s actually something far worse – an opportunistic jackal, vicious when faced with weak defenceless prey, cowardly when faced down and exposed.

His pack boasts others eager for the spoil such as Berlusconi and Aznar. This lot are a breed as yet unrepresented at Crufts – the dogs of war.
William Goymer, by e-mail 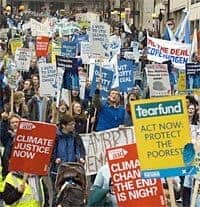 Learning to toe the class line?