This article is over 11 years, 9 months old
Budget Day is set to see a major show of resistance to New Labour’s programme of cuts as 200,000 government workers prepare to strike.
By Matthew Cookson
Downloading PDF. Please wait...
Tuesday 23 March 2010

Budget Day is set to see a major show of resistance to New Labour’s programme of cuts as 200,000 government workers prepare to strike.

The action by PCS union members is one of many acts of rebellion by ordinary people—shifting the blame for the crisis back on the bosses.

Others include the strike at British Airways (see pages 1 and 3), the Network Rail dispute and the forthcoming protests in defence of the welfare state.

These struggles must all come together to ensure victory.

New Labour is preparing the ground for mass job cuts across the civil service.

“By striking on budget day we’re highlighting what the government proposes to do to our jobs,” Niaz Faiz, a leading PCS union rep, told Socialist Worker.

“We are already facing cuts of up to 20 percent in my department, with more to come.”

“We had to strike on budget day,” says Dave Franklin, a worker at the Land Registry in Plymouth.

“But it’s a shame we’re not taking action at the same time as BA and Network Rail staff.

“The last strike went very well with people joining the union and the largest picket line we’ve ever had on the first day of a strike.”

The PCS planned protests and rallies across the country, with events in Birmingham, Liverpool, Bournemouth, Bristol, Cardiff, Manchester and more.

Workers will protest outside parliament during the budget reading. And other trade unionists and students were to join pickets and protests in solidarity.

The dispute is about changes to workers’ redundancy payments, known as the Civil Service Compensation Scheme.

The changes are to go through parliament at the beginning of April. The PCS has launched legal action to stop them.

But this week’s strike cannot be the end of the action. More will be needed to force the next government to back down 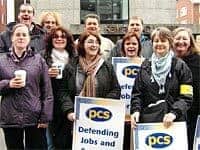