Workers in the NUT, NASUWT and GMB unions at three south east London schools began a two-day strike on Tuesday of this week.

The workers in the Prendergast Federation schools in Lewisham are fighting a plan to turn them into academies.

The strike was well supported at all three schools. Nearly 60 staff, parents and students picketed at the Prendergast site.

“Many staff have worked at the school for over 15 years and we have devoted our lives to it. We care about the students’ education—why damage it?”

A GMB member said, “We need to escalate the public action, such as last Saturday’s march through Lewisham.”

Up to 200 students, parents, teachers and supporters of the Stop Academies in Lewisham (Sail) campaign joined that march against the academy plan.

Students shouted, “Academy status sucks” and called on the Leathersellers to be “goodfellas” by giving into public opinion.

There was a colourful display of banners from Sail, Lewisham and Southwark College unions, the Trade Unionist and Socialist Coalition, Greenwich NUT, the GMB and People Before Profit. 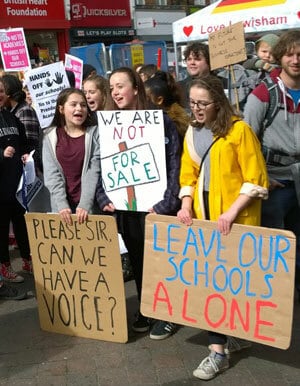 Grace, a local sixth form student, was worried that her school would become an academy if the Prendergast schools did.

“Why fix something if it isn’t broken?” she asked. “I just want a world that’s fair.”

NUT member Benine said, “I want a parental vote. It’s wrong not to give us a voice.”

Another teacher said staff are “worried about jobs and worried about restructuring” if the academy plan goes through.

Students from Prendergast had organised their own ballot the day before the protest, when 294 voted against academy status and only eight for.

They called on the governors to hold a binding ballot of parents.

Students said they had been threatened with removal by school security and with up to five days exclusion for staging sit-downs in the past. They are prepared to continue.

Local NUT branch secretary Martin-Powell Davies said unions had offered to call off this week’s strike if governors postponed the consultation and conducted a parental ballot.

But this was too little too late—and the strike went ahead.

Governors have set a consultation period from Monday of this week through Easter until 18 May before a final decision is taken.

However the education secretary has already issued an order for conversion.

And so far the consultation appears to be no more than a paper exercise. It meets none of the demands of the campaign.

Now is the time to escalate the action and force Leathersellers to back down. 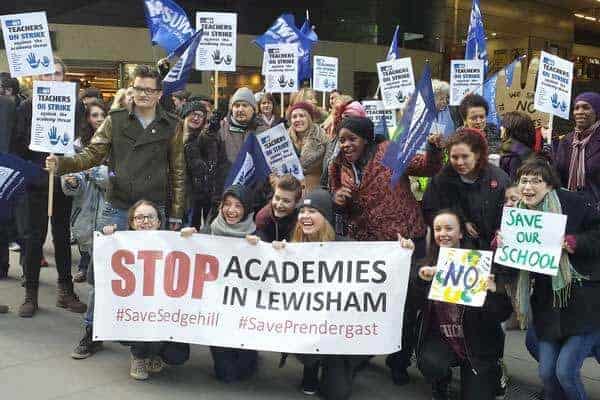 ‘We are going to win our academies battle’ say Lewisham strikers