In a notice to members, the FBU executive council (EC) said that it had “postponed” the strike due to changes in the government’s position.

“The Fire Minister has said that the proposal from the employers removes the threat of ‘no job, no pension’. Firefighters will have serious concerns about this claim and will want cast-iron guarantees that this will be addressed properly.

“The FBU has temporarily postponed the planned strike to enable these guarantees to be firmed up. However, there are a number of important and unresolved elements of our dispute and we need to be clear that we may have to resort to further strike action.”

The vote on the executive to call off the strike was not unanimous.

The London FBU told its members, “We can confirm that the trade dispute on pensions remains live, and no offer has been received from government that the EC considers is worthy of recommendation to FBU members. “Given this, it is inevitable that the EC’s decision will lead to some disquiet and a great many questions from members.

“For the record, we can confirm that the executive council member for London voted against the proposal to cancel the strike.”

The five-hour strike was over Tory plans to force firefighters to work until they are 60 or risk massive cuts to pensions, and other pension attacks.

In the notice to members the executive said that the dispute on pensions remains live, and that it has not endorsed any offer from the government.

London FBU region members will meet on Monday to discuss the latest decision by the union. Every branch should meet urgently to do the same.

Dave Waterman, FBU London south west area chair, told Socialist Worker, “The executive council has called off the strike on an offer, a suggestion, that doesn’t even come close to addressing the demands that we made at conference.”

More than 5,000 firefighters marched through central London on Wednesday of this week.

Dave said, “Firefighters travelled for hours, coming from all over the country. That was such a demonstration of the fire in the belly of members on the ground, and then the executive council does this.

“It has let the membership down.

“We have to keep debates and discussions going. We have to try to encourage members not to lose heart. That’s exactly what the government and bosses want.”

According to Yusuf,  “We have to ask, where is this going? There has to be a sharp discussion in the union. It is a strong argument for deepening rank and file organisation.”

Trade unionists and activists are set to get together in London for the Unite the Resistance (UtR) conference this Saturday. The workshops will be a chance to debate the way forward for all activists. For more details go to uniteresist.org 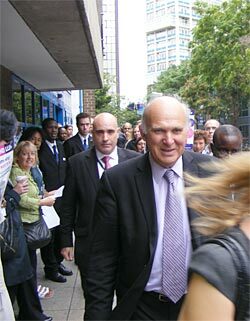