People across Britain are joining rallies against racism, in support of refugees and to build mass demonstrations on Saturday 19 March.

Meanwhile the general secretaries of Britain’s two biggest unions—Len McCluskey of Unite and Dave Prentis of Unison—pledged support for the demonstration.

The meetings have been organised by Stand Up to Racism.

A meeting in Sheffield on Monday saw 150 trade unionists anti-racist activists, Muslims, socialists and others come together.

A main focus at the meeting was the Tories’ treatment and scapegoating of refugees.

People bought tickets for and made a commitment to building the demonstration in London.

“My message to David Cameron is, you cannot divide us with your racist scapegoating.”

And Collette, who was at the meeting said, “I’m going on the demo because I’m fed up of people fleeing war and starvation being blamed for something that has been caused by the bankers and super rich.”

Some 200 people joined a rally organised in Balham, south London, on Wednesday of last week.

Aisha Ahmed, who’s planning on joining the London march, told Socialist Worker, “There are a lot of different opinions on refugees.

“But there is also a significant number of people who support them.

“Even if the demo doesn’t immediately shift the government, it will show that people care about the issue and build the movement.”

Murad Qureshi, a London Assembly Labour member, said, “Britain’s refugee intake is too low, too slow and too narrow.”

Finn Brennan from the Aslef train drivers’ union slammed David Cameron for dismissing refugees trapped in Calais as a “bunch of migrants”.

The support for refugees is also boosting people’s confidence to take on the government’s Islamophobic Prevent strategy.

Imam Suliman Gani said, “Muslims are feeling demonised and marginalised, but with this gathering we know we’re not alone.

“United we stand, divided we fall”.

Weyman Bennett from Stand Up to Racism said, “I was contacted by the authorities to say the demo might be too close to the elections.

“That’s not the real reason they contacted us—they’re scared of lots of people coming out and opposing the government’s policies.

“There’s more of us that there are of them—we have to get a voice.”

The rallies were the first of many planned in towns and cities across Britain to build for the demonstrations in London, Glasgow and Cardiff.

Thousands of children who came to Britain as unaccompanied refugees were deported back to warzones after they turned 18.

Many are orphans with no link to these countries, having spent their formative years in Britain.

As many as 2,748 former unaccompanied child asylum seekers have been deported to Afghanistan, Libya or Syria since 2007.

Immigration minister James Brokenshire admitted last week that the number was more than two and a half times higher than he’d claimed in November.

Brokenshire claimed 1,040 had been deported.

Future Stand Up to Racism rallies include: 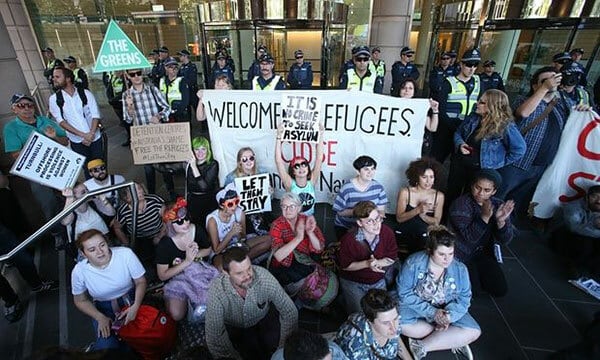