Both prime minister Brown and Tory leader David Cameron say that ordinary people have to sacrifice their jobs, pensions and services so that they can prop up the bankers and spend billions on war.

And the cuts aren’t just looming in the future – they are with us already.

Some groups of workers are fighting back. We’ve been on all-out strike for nearly three weeks now to stop cuts to jobs and courses at Tower Hamlets College in east London.

Management has thrown everything at us to try and break the strike, but we’re standing firm.

We can’t let the cuts go ahead – the human cost is too great.

This is about people’s lives. We’re standing up and saying that people can’t just be randomly thrown out of work.

Cuts will always hit the most vulnerable people. It is madness to do this at a time of high unemployment, when people need education and training.

But this fight is not just about one college, or even just about education.

Workers everywhere are under attack. If our bosses get away with the cuts then your bosses will have more confidence.

But if we win, it will prove to every other worker who is facing attacks that they don’t have to put up with it. Whoever is in government after the next election, whether it’s Brown or Cameron, will be set on continuing the cuts.

Labour has spent more than a decade attacking public services. We are taking our fight to the Labour Party conference in Brighton on 27 September, when a

dele­gation from our college will join thousands of others in demonstrating for jobs, peace and education.

Everyone who faces attacks and is angry about the cuts should march with us.

We need to show the government that ordinary people should not pay the price for this crisis.

Cuts aren’t inevitable – we have the power to stop them. The fight back starts now.

March on Labour conference next week 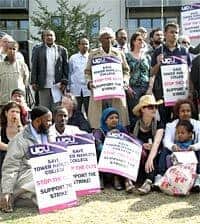