This article is over 11 years, 0 months old
Workers on the Northern and Bakerloo tube lines joined a second 24-hour strike from Friday evening of last week—defying London mayor Boris Johnson who launched a tirade of abuse against the tube workers.
Downloading PDF. Please wait...
Tuesday 18 January 2011

Workers on the Northern and Bakerloo tube lines joined a second 24-hour strike from Friday evening of last week—defying London mayor Boris Johnson who launched a tirade of abuse against the tube workers.

Strikers are protesting against the sacking of union activists Eamon Lynch and Arwyn Thomas, in what RMT general secretary Bob Crow calls “a clear-cut case of victimisation”.

Their dismissal is part of a wider bosses’ offensive against the unions as they attempt to push through job cuts. That attack saw four days of strikes last year by members of the RMT and TSSA unions.

London mayor Boris Johnson signalled his intent to keep up the attacks last week when he told a collection of bankers and City grandees about his plans for “driverless trains” on the tube network.

He said, “Anybody in this room could in a matter of a few weeks acquire the qualifications to supervise an underground train.”

Bob Crow responded by saying, “Boris Johnson’s comments show he has complete and utter contempt for the staff who ensure safe transport of Londoners every day.

“It is clear he is planning to sack thousands of tube drivers and that act of provocation will be met with fierce resistance.”

Few believe that Johnson’s boast is anything more than rhetoric. It would cost millions to upgrade the tube network in the way the mayor is fantasising about.

And, far from destoying the unions, workers still retain power on driverless systems—as a strike by RMT members on the DLR system this week will prove.

DLR workers are set to strike on Thursday and Friday over a breakdown of industrial relations with their Serco Docklands employers.

The company has failed to consult with the union over redundancies, pension arrangements, grades, rosters and a 35-hour week claim.

The action is also against the victimisation of union members. 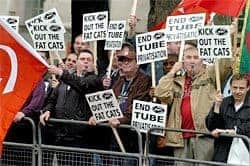