This article is over 9 years, 9 months old
Thomas Kvilhaug from the International Socialists in Norway on the trial of a mass murderer
Downloading PDF. Please wait...
Tuesday 17 April 2012

Anders Behring Breivik appeared in court in Oslo on Monday. He pled not guilty and showed no regret—but burst into tears while watching his own pathetic propaganda video.

We refuse to care about his sanity. This question has pulled attention away from the need to fight fascism—and the dangerous influence of racism and Islamophobia.

Breivik is a fascist. His violent nature shows why we fight racism and fascism. He is using the trial to try and promote his vile views.

Because of this, well known anti-fascist Stein Lillevolden has refused to testify. He said he would not “be dragged around the circus tent like some clown in [Breivik’s] bizarre delusions”.

The media has paid a great deal of attention to Breivik’s monstrous character—but also played up his “tragic” side. This is agonising for surviving victims and relatives.

A report for the court by expert psychiatrists suggested that Breivik is a paranoid schizophrenic, mainly because of his skewed use of terminology. It ignores the fact that such usage is common on the far right.

Away from the court many people know the real answer to Breivik’s terror is anti-racism and solidarity.

Anti-racists have confronted and outnumbered mobilisations by the Norwegian Defence League and other racists. 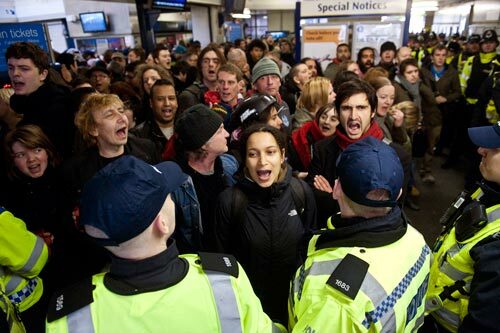