This article is over 13 years, 0 months old
Soldier who refused to return to Afghanistan speaks out
Downloading PDF. Please wait...
Tuesday 14 July 2009

AS politicians vie with each other to express their sympathies for British soldiers who have been killed in Afghanistan – soldiers that they all voted to send – a brave young man stands ready to be jailed for refusing to fight.

Lance Corporal Joe Glenton faces a possible two-year prison term after going on the run rather than return to Afghanistan and fight in a war he thinks is wrong.

Recalling his posting to Kandahar in 2006, Joe says that he gradually became aware that justifications for occupying Afghanistan were ringing hollow.

“The Afghan people were attacking us, even though our politicians said we were going in to help them. It came as a real shock,” he says.

“That’s when I became aware that there was something seriously wrong with the war.”

Today the truth about the war is dawning on millions of people in Britain.

Talk of the liberation of the Afghan people is proved false as poverty stricken villagers bury family members killed in the conflict.

Promises of reconstruction lie broken in the rubble.

And the grim roll call of young British soldiers who have lost their lives grows by the day.

Joe now believes the Afghan war is unwinnable, and that British troops should leave.

He is right. All those who want to see an end to the bloodshed should back his call. 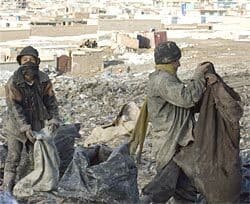 British soldier interviewed: ‘I realised the Afghan war was wrong’