Cambridge: we stopped racist EDL before and we’ll do it again

This article is over 9 years, 5 months old
Anti-racists in Cambridge are organising to oppose a protest by the English Defence League (EDL) next month.
By Sarah Ensor
Downloading PDF. Please wait...
Saturday 12 January 2013

Anti-racists in Cambridge are organising to oppose a protest by the English Defence League (EDL) next month.

Richard Rose, coordinator of Cambridge Unite Against Fascism (UAF), spoke to Socialist Worker. He said, “The statement to support the UAF demonstration next month has been signed by our MEP, local MPs, city and county councillors as well as trade unionists, schools and bands.

“So far we have leafleted mosques and the football and had a meeting with Cambridge United. We want to make it clear there is no place for fascists and racists in Cambridge’s multiracial, multicultural and multifaith community.”

In July 2011 some 2,000 anti-racists blocked the streets of Cambridge. The EDL attempted to protest against a mosque but only numbered 200 people. The march then was called by Cambridge UAF and led by a Kick Racism Out of Football banner and Cambridge Fans United.

Activists in Unite Against Fascism groups across Britain pushed back the fascist English Defence League (EDL) and their racist supporters in 2012.

The Nazis are trying to regroup despite their humiliating defeats in Norwich and Waltham Forest in east London last October and November. They also cancelled a planned march in Slough because they said they expected “massive local opposition”.

Meanwhile EDL leader Tommy Robinson (also known as Stephen Lennon and Paul Harris) has been sentenced to ten months in prison for entering the US illegally.

The fascists feed on poverty and anger at Tory cuts imposed since the financial crisis started 2007. They draw strength from Tory MPs blaming migrants for unemployment and low wages and the media blaming Asian men for child abuse crime.

In the North West the campaigns to kick out Nazi MEPs Nick Griffin and Andrew Brons are planning days of action against the British National Party with a Love Music Hate Racism tour. The Unite union has called a demonstration in April in Liverpool against the Nazis.

Unite Against Fascism has called a London solidarity protest with a massive Greek anti-fascist demonstration planned for next week.

The protest in Athens has won massive support from across Greece in response to the fascist Golden Dawn party.

Three of its supporters assaulted MP Dimitris Stratoulis while he was at a football match with his son.

Delegations of trade unionists and activists from Britain are set to join the anti-fascist rally in Athens. Solidarity protests are planned in cities across Europe.

In Britain coaches are booked to come to London on Saturday 19 January at 12 noon. They will assemble at Speakers’ Corner, Hyde Park, London (Marble Arch tube) and march to the Greek embassy.

Join the Cambridge campaign leafleting this Saturday, 12 January in the Market Square 12 noon to 3pm. The anti-EDL march and multicultural event will be on 23 February, Cambridge city centre. Go to cambsagainstthenazis.co.uk and uaf.org.uk for updates. 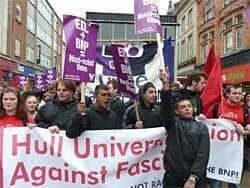 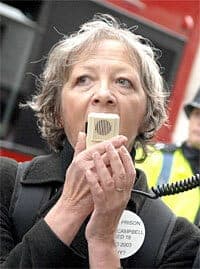 Women in custody: a shameful record of deaths in prison