Campaigners set to march against Ukip conference in Doncaster

Ukip is fighting to win its first ever seat in parliament with former Tory MP Douglas Carswell standing in a by-election in Clacton on 9 October.

Polls show that he is running in the lead. Farage himself is set to stand in South Thanet, Kent, next year.

But anti-racists plan a show of unity to show Ukip it is not welcome.

The Stand Up to Ukip campaign has called a demonstration outside the conference on Saturday of this week.

“This sort of unity is Ukip’s worst nightmare.”

The civil service workers’ union PCS has backed the demo. Many trade unionists, including Doncaster Care UK workers, will join it.

Activists have been out in their local areas challenging Ukip’s scapegoating of migrants.

Linda Smalley from Morecambe, Lancashire, told Socialist Worker about how Ukip has been trying to build in her area.

“Ukip says, ‘We’re here for you.’ It is putting up people who have been active locally, who are known and have credibility in the community,” she told Socialist Worker.

“We have to address the lies about immigration.

“When you talk to people and bash the myths that the racists use you can win them,” she added.

“We need to be visible and show people that Ukip is not going to save the local library or keep a school open.”

Jo Cardwell of Stand Up to Ukip said, “Farage wants to build up a head of steam towards his goal of a small group of MPs that could hold the balance of power with a weak government.

“Ukip will drive through austerity for us, and benefits for themselves and their rich friends and push a racist agenda.

“The demonstration is the beginning of a campaign that is saying no to racism, no to bigotry. We want to expose the lie that Farage and Ukip are anti-establishment.” 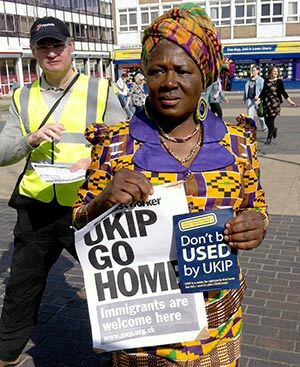