A group of blacklisted workers has won millions of pounds in compensation from eight construction firms.

The payouts mean that a group litigation High Court trial that was due to start today, Monday, will not go ahead.

Dave Smith is secretary of the Blacklist Support Group. He called the result “a historic victory for the trade union movement against the vicious face of free market capitalism”.

Dave said, “Despite all the denials and attempts to cover up their secret conspiracy, the largest multinationals in the construction sector have been forced to pay out millions in compensation.”

The eight firms – Balfour Beatty, Carillion, Costain, Kier, Laing O’Rourke, Sir Robert McAlpine, Skanska UK and VINCI – were at the heart of the blacklisting scandal. They paid blacklisting firm the Consulting Association for information on workers – and provided information too.

Dave described it as a “human rights conspiracy against trade unionism by big business and shady anti-democratic political policing units within the British state”.

A hearing will take place on Wednesday. A public apology and admissions about the firms’ involvement with the Consulting Association will be read out in open court.

Blacklisted workers and supporters are set to gather at the court to make their voices heard.

Roy Bentham from the Blacklist Support Group and a Hillsborough disaster survivor told Socialist Worker he plans to keep fighting.

“This has always been about truth and justice for me and so many of my fellow workers,” he said.

“Just like the magnificent result in Warrington over the Hillsborough disaster two weeks ago, not just the discredited companies but the British legal system is now on trial.

“I don’t want this kicked into the long grass for 27 years. The Blacklist Support Group will not rest until we get accountability.”

The settlement does mean that construction bosses will avoid giving evidence in the group case but that has cost them. The total figure for compensation paid out by the firms is estimated to be £50 million with an additional £200 million in legal costs.

Dave said workers who have been blacklisted will continue to fight for the full truth and for justice.

“The firms might have hoped that by buying their way out of a show trial the scandal will go away,” said Dave. “It won’t.

“These fat cats and their friends in the police took food off our children’s table, causing years of family hardship. We take this personally. A few quid and a mealy mouthed apology is a long way from justice.

“We intend to continue our fight to expose those who orchestrated and colluded with blacklisting. The wretches should be in jail.” 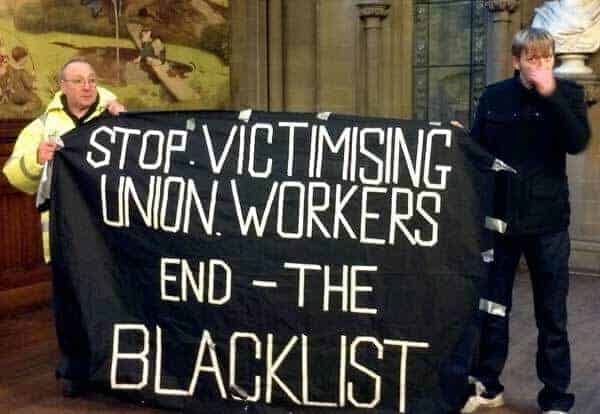