This article is over 8 years, 7 months old
By Dave Sewell
Downloading PDF. Please wait...
Tuesday 28 May 2013 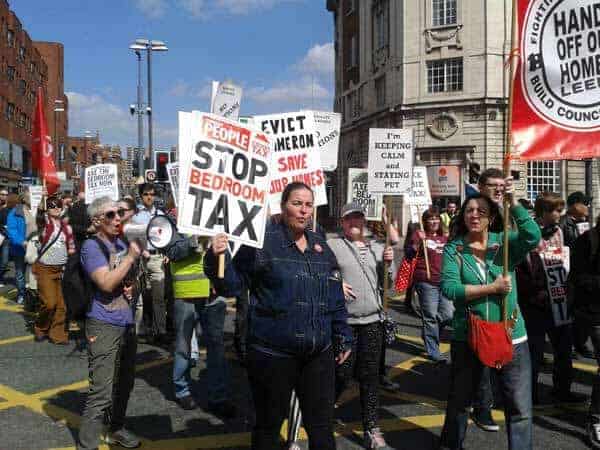 Benefit slashing Tory minister Iain Duncan Smith called for an extra £3 billion of welfare cuts on Tuesday of this week.

Ministers were asked to propose savings for chancellor George Osborne’s next spending review. He aims to cut an extra £11.5 billion.

Duncan Smith offered to protect spending on the police and army by cutting from the poor claiments his department covers.

His ideas include denying housing benefit to people under 25.

Duncan Smith wants young adults to move back in with their parents if they can’t afford the rent themselves.

But parents of grown-up children were among those targeted by his bedroom tax.

And some people have left abusive families—or taken Duncan Smith’s own advice to “get on the bus” out of areas with few jobs.

Thousands of poor council or housing association tenants are behind on their rent thanks to benefit cuts linked to their “spare” bedrooms.

Now landlords have begun sending threatening letters to  tenants warning they may be evicted if they can’t pay.

This includes Labour councils, and Green Party-run Brighton and Hove which last month voted not to evict anyone for the unfair tax.

“I feel like a turkey that voted for Christmas,” one tenant in Labour-run Barnsley told Socialist Worker.

“They’ve sent us a really nasty letter. They’re trying to scare us with court costs on top of the arrears.

“They know I have a disability and need an extra room. But the Labour council is pursuing a ConDem policy.”

Most tenants’ arrears so far are very small. And despite the letters, landlords are a long way from being able to evict people over the bedroom tax.

They hope that by intimidating people now they can make them pay before the debt gets too big—or get tenants out of their homes.

But for many, keeping up with the rent now that their benefits no longer pay for it would mean going without food.

Most have not left their homes despite the intimidation. They are right to stay.

Write to your councillor telling them to oppose evictions – for a  a model letter go to bit.ly/11mrEnF
Topics Bedroom Tax, Benefits, Housing, Tories