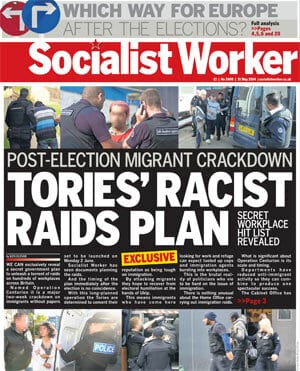 We can exclusively reveal a secret government plan to unleash a torrent of raids on hundreds of workplaces across Britain. Named Operation Centurion it is a major two-week crackdown on immigrants without papers set to be launched on Monday 2 June.

Socialist Worker has seen documents planning the raids. And the timing of the plan immediately after the election is no coincidence.

With this long-planned operation the Tories are determined to cement their reputation as being tough on immigration. By attacking migrants they hope to recover from electoral humiliation at the hands of Ukip.

This means immigrants who have come here looking for work and refuge can expect tooled up cops and immigration agents bursting into workplaces. This is the brutal reality of politicians who vie to be hard on the issue of immigration.

There is nothing unusual about the Home Office carrying out immigration raids.

What is significant about Operation Centurion is its scale and timing. Departments have reduced anti-immigrant activity so they can combine to produce one spectacular success.

The Cabinet Office has been central in pushing that the operation should happen now. Ministers are directing the civil servants.

The Home Office recently held a silver command meeting to sort out tactics. It has pulled in as many government departments as possible for the operation.

Central to the plan is Peter Clark, Deputy Head of Operational Intelligence for the UK Border Agency. Much of the work will be carried out with Home Office Immigration Enforcement (HOIE) officers.

One is Operation Bezzim with the Department for Work and Pensions in the South East. Another is Operation Abate which has been raiding restaurants and takeaways in Sussex.

Documents that Socialist Worker has seen give lists of targets listed by region. The level of detail varies from the specific to the vague.

In one instance it promises to raid care homes in Hampshire, noting “If offenders are located we will most likely plan visits to individual homes”. Another is planned on a “prominent” London restaurant.

“Rough sleepers—Stratford Mall, E15—police referral” will be targeted and “a number of barbers in South Wales”.

Immigration minister Mark Harper tried to claim that such raids defend workers’ rights. He said after similar raids last year, “We are sending a clear message to employers who choose to use illegal labour—we will find you and you will pay a heavy penalty.

“Illegal working undercuts legitimate businesses and is often linked to exploitative behaviour such as tax evasion and harmful working conditions.”

But deporting people does not stop them being exploited or suffering terrible working conditions. The last time raids were launched on migrant workers the Home Office tweeted pictures of the arrests—exposing the real attitude behind the operations.

The Home Office was also responsible for the racist “In the UK illegally? Go home or face arrest” vans.

Operation Centurion is the Tories’ response to the ramping up of anti-immigrant feeling. They hope to hammer the message home that poor migrants are to blame for the problems faced by ordinary people in Britain, not the rich bankers.

But this is a lie. Migrants have come here to look for a better life. They should not become the scapegoats for a crisis created by the rich.