Firefighters take to the streets over pension cuts

Firefighters in England and Wales were set to strike this Saturday against Tory plans to force them to work until they’re 60 or face savage cuts to their pensions. Workers will walk out for five hours, starting at 6.30pm.

The firefighters, who are members of the FBU union, also struck for four hours in September.

Workers in Scotland are not included after voting in a consultative ballot not to strike after the Scottish government offered “improved” proposals.

But they have not ruled out the possibility of strikes later.

Thousands of firefighters and supporters were also set to protest in London on Wednesday, against cuts to regional budgets as well as the attack on pensions.

Ten fire stations and 550 firefighters jobs have been approved for cuts in London alone—and firefighters are furious.

“The union gave us 50 tickets on the train and they all quickly went,” Paul Davies, Salford FBU branch rep, told Socialist Worker. “So other people are making their own way down.

“We’ve lost 400 posts in the last ten years. And we’ve been told that the fire chief is cutting a further 10 percent of his budget.

“Just last week we lost fire engines in Broughton and Philip’s Park. That’s two big inner city stations with one engine between them.”

In a desperate attempt to intimidate firefighters from protesting, London Fire Commissioner Ron Dobson issued a letter claiming he will take legal action if firefighters wear their uniforms on the demo.

But workers are determined to stand up to the bosses’ and Tories’ attacks.

“Ask anyone in our station, or stations around, and they won’t have a good word to say about this fire chief we have,” said Paul.

“The bosses only see the pound signs. The time for waiting for someone else to fight has clearly gone.

“Cuts are coming thick and fast and they’re affecting everybody everywhere. They have got to stop.” 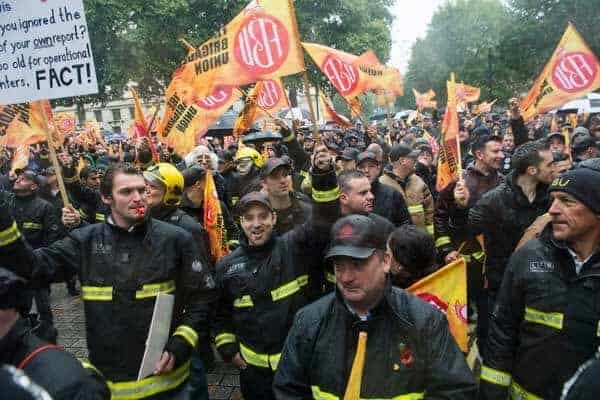