This article is over 12 years, 11 months old
Protests against Israel’s assault on Gaza have continued around Britain.
Downloading PDF. Please wait...
Monday 19 January 2009

Protests against Israel’s assault on Gaza have continued around Britain.

In London up to 10,000 people attended a rally in Trafalgar Square. Speakers included Lindsey German, the convenor of Stop the War, who condemned Israel’s attack and the West’s continued support. She added, “This ceasefire is not a ceasefire in any meaningful sense if the Palestinians don’t have the right to defend themselves. Self defence is no offence”.

Diane Abbott MP said Israel’s actions were war crimes. The West had to break from supporting it, she said, and we cannot rely on our leaders coming to support the Palestinians. “There is no bigger admirer of Barack Obama than myself, but we cannot rely on that,” she said.

As the rally closed, hundreds of young people decided to march to the Israeli embassy. A line of police blocked their direct route out of the square, but after nearly an hour of confrontation they managed to get out on the other side, marching along Charing Cross Road and down Shaftesbury Avenue. At the core of the march were about 300 mostly Asian school and FE students.

The march was not organised and became spread out along the road, which allowed the police to surround the majority on Piccadilly and finally bring it to a halt.

However the spontaneous march had brought much of London’s West End to a standstill for more than an hour.

Reports from around the country show the breadth of protests. The fact that 2,500 people protested in Middlesbrough and 1,000 in Exeter gives an idea of the scale of the anger.

This Saturday saw Birmingham’s largest demonstration in many years, joined by over 5,500 people. They marched through the city centre to a rally outside Council House in Victoria Square.

A fundraising dinner for medical beds for Gaza on Saturday raised over £19,500.

On Sunday about 6,000 people protested. Three different sized coffins were held high to represent the ages of those who have lost their lives. They were accompanied by a hearse with the words “Freedom” and “Justice” on its windows.

Over 500 people attended a vigil and protest on Saturday in Cambridge Market Square. It was a lively protest and a popular vote was taken to spontaneously march through the streets. Over £500 was collected for Interpal and Medical Aid for Palestinians.

A 500 strong march took to the streets of Dundee to a rally in City Square on Saturday. It was called by Stop the War Coalition and Tayside for Justice in Palestine.

Over 1,000 people marched through Exeter on Saturday.

A bucket collection raised £1,000 was for Medical Aid for Palestinians.

As well as PSC, Stop the War and CND there were also banners from the Woodcraft Folk, the National Union of Teachers and the Communication Workers Union, who gave a £200 donation to MAP. There were excellent turnouts from both the University and the mosque.

At least 150 people demonstrated outside the BBC on Thursday 15 January to express their disappointment with the BBC’s coverage of the war on Gaza.

Chanting “genocide is a crime, why not show it on prime time?”, and “60 years of occupation, why not show it on your station?”, demonstrators were particularly critical at the lack of historical context of Israel’s occupation of Palestinian land, and the uncritical portrayal of Israel as engaging in a war of self-defence.

Shoes were placed on the steps of Manchester Town Hall last Sunday. Each shoe a reminder of those Palestinians killed in Gaza. Over 1,000 angry protesters heard an eyewitness report from Chris Davies MEP just back from Gaza, and National Convener of Stop the War Lindsey German who was cheered when she reminded us this was “Bush’s last weekend”.

Last Saturday the biggest political demonstration in Middlesbrough’s recent history took place with around 2,500 people filling the streets in support of Palestine.

One of the organisers of the demonstration Pete Smith of Teesside Against the War summed up the day stating, “This was the biggest political and humanitarian demonstration in Middlesbrough’s history. Mayors, councillors, and “leaders” cannot mobilise on the scale we can. People had a choice today, to stay home, passive, silent or come and raise their voice for the people of Palestine”. It seems a great many people chose the latter.

Around 500 people joined a demonstration in solidarity with the people of Gaza in Newport, South Wales on Saturday. Initially 300 hundred strong, More people joined the march as it went through the city centre. Many brought their own home made placards with them.

Speakers at the rally included John Griffiths AM, Leanne Wood AM.

On Saturday around 600 people marched in Nottingham. This was the biggest and most militant anti-war demo seen in Nottingham for years, and marchers kept up a steady stream of chants as they marched down Mansfield Road to the Old Market Square. There we appropriated the newly erected statue of Brian Clough as a stage. Speakers were then heard from a range of organisations.

Around 1,000 people joined a demonstration called by the Oxford Palestinian Solidarity Campaign and Oxford Stop the War Coalition in Oxford on Saturday. The rally at the end heard from A Palestinian refugee who told of the messages she received from her sister trapped in Gaza telling her of the terror and hardship the Palestinians are facing.

Oxford historian and professor of International relations Avi Shlaim exposed the claims that Israel is the victim as lies. Labour and Green party city councillors announced their intention to cooperate on a motion in support of Gaza.

On Sunday 1,500 protesters held a mass “die in” in Preston Flag Market and read out the names of children killed in the conflict.

Some 300 children and young people from across the city took part to highlight the fact that child deaths in Gaza are equivalent in number to a Preston Primary School.

The participants covered themselves in white burial shrouds, to make a visual statement about the Israeli atrocity.

This successful event came on top of the victory scored in the council chamber where a resolution was passed denouncing Israel and recognising Hamas.

There was a fantastic demonstration of around 250 people through St Albans. It defied the police to march in the road down St Peters Street and back to a rally at the St Albans Arena. It was loud and angry from start to finish. There was a tremendous buzz around it, much enthusiasm for more activity, and a strong bond created with key figures in the local Muslim community.

Up to 400 attended a rally/vigil outside Sandwell Council House, in the West Midlands, on Friday night. The vigil against the massacre in Gaza was called by the Yemini Community and at short notice were joined by trade unionists from Unison, Unite and the NUT. Several Labour Councillors also attended the respectful, but angry lobby, which heard for several calls for a boycott of Israeli goods.

Members of the actors’ union Equity raised over £1,700 for Gaza at a benefit in Sheffield’s Library Theatre on Friday night.

Over 100 attended a meeting in Swansea on Thursday 15 January, called on the British government to stop arms sales to Israel and end free access for Israeli goods to Britain.

Over 30 people gathered at a stall held by Cornwall Stop the War Coalition in Truro on Saturday to voice their protest at Israel’s assault on Gaza and show solidarity with the Palestinian people.

Up to 1,000 people marched through Walthamstow in east London on Saturday.

More than 100 people took to the streets of Whitstable on Saturday. The main aim of the protesters was to raise awareness of the atrocities being carried out by Israel. Speakers from the local Labour Party, the Muslim Welfare Association and Stop the War called for local people to boycott Israeli goods and support the campaign to get aid for those in Gaza. 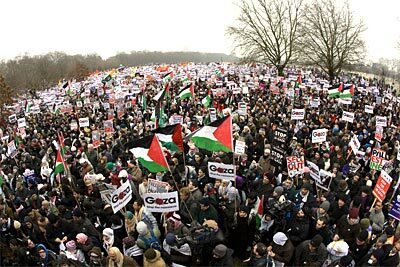 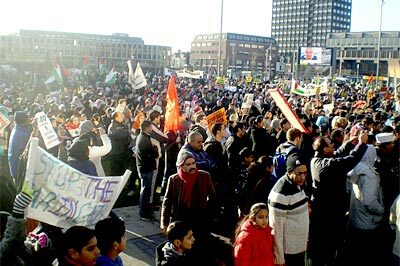 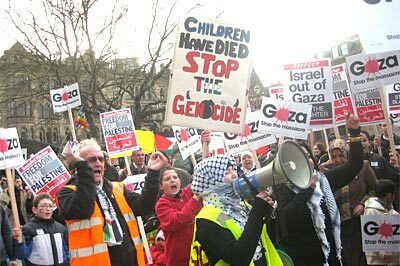 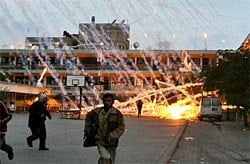 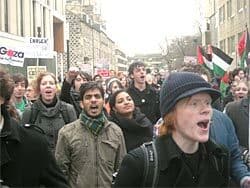 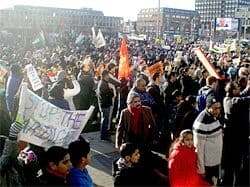