This article is over 16 years, 2 months old
Around 26,000 lecturers at over 200 colleges struck on Wednesday of last week over pay, and hundreds demonstrated in Birmingham as education secretary Ruth Kelly visited the city.
Downloading PDF. Please wait...
Saturday 26 November 2005

Around 26,000 lecturers at over 200 colleges struck on Wednesday of last week over pay, and hundreds demonstrated in Birmingham as education secretary Ruth Kelly visited the city.

The strike was very successful, with activists in many areas reporting high levels of participation on picket lines.

The strike was solid across the college, with the vast majority of classes shut down.

The lunchtime demonstration was excellent and noisy — up to 100 people marched, including some students.

The rally on the steps of the Camden Road site was inspiring despite the chill. Jeremy Corbyn, our local MP, slammed the underfunding of further education, and the way that the sector has been casualised, leaving hourly paid staff insecure and underpaid.

Huseyin Acar, the president of City and Islington student union brought us the support of the student body. Finally, a trade unionist from Colombia spoke of the brutal methods Coca-Cola are using in that country.

Childcare lecturer Mine Conkbayir says, “As a recently qualified lecturer in further education and a member of the Natfhe union, it was great to be part of the national strike.

“Everyone involved felt vibrant and it gave lecturers the confidence to take the argument back to work and challenge the non-believers.

“We need to take the time and effort to get more teachers involved in fighting for their, and their students’ rights within further education.

“The way that we do this is by being confident about the fact that we can win and by linking it to Blair’s attack on education and the fact that there is money for war that should be used where it is most needed.”

The pickets at all four campuses of Leicester College saw a solid turnout. Most staff members and students showed their solidarity by not crossing the picket lines.

The special needs department at the Abbey Park site was closed despite attempts by management and the union to exempt the staff from the strike.

“It’s hardly fair while our colleagues are out on the picket line fighting for our pay that we’re not standing side by side with them,” said one special needs teacher.

At Dunstable College in Bedfordshire very few lecturers crossed picket lines and a couple who had intended to work decided not to once they were aware of the arguments.

The vast majority of classes were cancelled. A number of students showed their support by joining us on the picket lines and others simply went home.

Now we have to encourage Unison union members to have joint meetings with us so future action can be coordinated, and pressurise our Natfhe national leadership to extend the action.

Everyone was aware that a one-day strike would not be enough to shift the employers and the government. There was also deep anger at reports that colleges might be privatised.

The vast majority of Natfhe members at Blackburn college supported the strike. We also sent a delegate to Birmingham for the national lobby.

Lecturers at Thurrock and Basildon College were out on picket lines in force.

Natfhe members received terrific support from students and passers-by. Both campuses were effectively closed by the action with around 100 lecturers on strike.

This is just a selection of the reports we received. Thanks to all who sent reports. 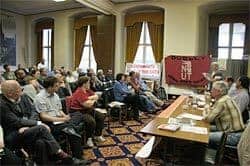 From Birmingham to Glasgow: we’re ready to resist 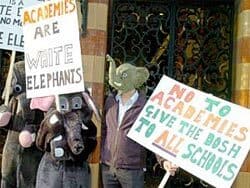