Growing pressure for teaching unions to call strikes in spring

This article is over 9 years, 5 months old
Hopes were rising as Socialist Worker went to press that teaching unions could soon announce a date for a strike in schools this term.
By Nick Grant, NUT national executive committee (pc)
Downloading PDF. Please wait...
Saturday 12 January 2013

Hopes were rising as Socialist Worker went to press that teaching unions could soon announce a date for a strike in schools this term.

Officials from the NUT and NASUWT unions met on Tuesday of this week to assess their latest joint response to the government’s general assault on our pensions, pay and workload.

This follows a unanimous commitment by the NUT national executive committee in December to organise strikes before Easter of this year.

There is every urgency to do so. Chancellor George Osborne announced the deregulation of national pay in his pre-budget statement on 5 December. The deadline for consultation was Tuesday of last week.

More detailed attacks are expected to be announced before the whole package is processed through parliament by Easter. The foul public service pensions bill is also set to be finalised before Easter. Among many disgraceful measures it will outlaw any future final salary schemes.

There were also funding cuts announced just before Christmas to the local authority central spending equivalent grant. These will favour academy schools’ funding at the expense of the rest from April.

Teacher sackings are far more likely in 2013 than at any time since Tory Margaret Thatcher’s reign.

Whenever the strike date is announced, teachers in all schools have to gear up for a serious fight. The NUT is organising local reps’ briefings. School meetings, preferably held jointly with NASUWT members, should be happening everywhere.

The stakes are high but this government is weak. Minister Michael Gove’s unpopularity has soared following his decision to erase Mary Seacole, a black nurse during the Crimean War, from the history curriculum.

A lead from the NUT, alone if necessary, with strikes now can light a spark across the working class. 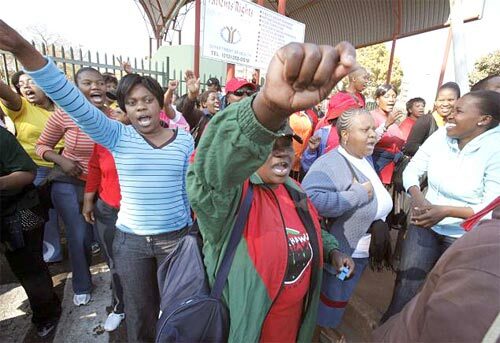