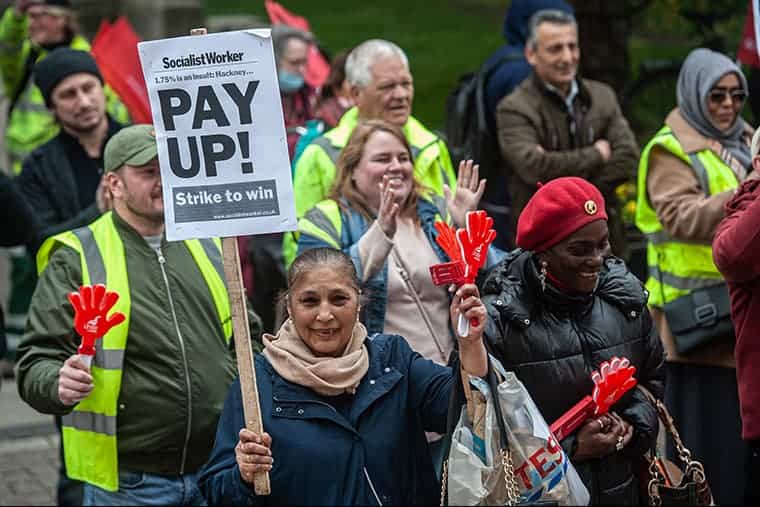 More than 100 council workers in Hackney, east London, celebrated their three days of strikes at an upbeat rally outside the town hall on Wednesday. The Unite union members walked out on Monday to demand a 10 percent pay rise.

Refuse and cleansing workers joined building maintenance and special education needs and disabilities (Send) at the rally. They heard union shop stewards and supporters thank them for standing up to bosses’ attempts to undermine the strike. Unite shop steward Melvin Drayton said to cheers, “We’re not going to tolerate management’s threats and bullying.”

Other strikers talked about how some 50 maintenance staff had foiled management’s 5.00am attempt to undermine the picket lines. Workers said bosses tried to move refuse trucks out of the depot to a neighbouring road. Agency staff eventually got the trucks moving. But, as one striker said, “We made it clear to them that they can’t do this without facing up to us”.

Send staff spoke about managers moving buses out of their depot to residential streets in order to avoid pickets. Again strikers made clear their determination to stop the buses whenever they could.

Usha, a Send worker, said, “I’m a part-time worker, but because of the pressure we face I end up working full-time”. Another strike, who has worked at Hackney council for 20 years said,  “I was earning more money when I joined than I do now. The 1.75 percent is an insult. We were told we would get a bonus for working all the way through Covid. We ended up with a £5 voucher for Greggs.”

Dean, a Unison steward from neighbouring borough Islington, said, “While the billionaires fled to their posh yachts when Covid hit, we really found out who runs society – you lot. Now they’re back making their billions we’re told to get by with a 1.75 percent rise. And that’s after a 20 percent cut over the past decade. We need to stand up to management’s divide and rule tactics and stand together for a real pay rise.”

So far Hackney Labour council’s only response to the action has been to “express its disappointment that “some services will be disrupted by strike action”. Unison steward Brian Debus, said, “There are 57 Labour councillors in Hackney, yet not one of them has made clear their support for this action. It’s disgraceful”.

As Melvin said, “There’s money in the council’s coffers. £300 million. They can pay us the 10 percent now.” The rally finished with loud chants of “What do we want? 10 percent. When do we want it? Now!” 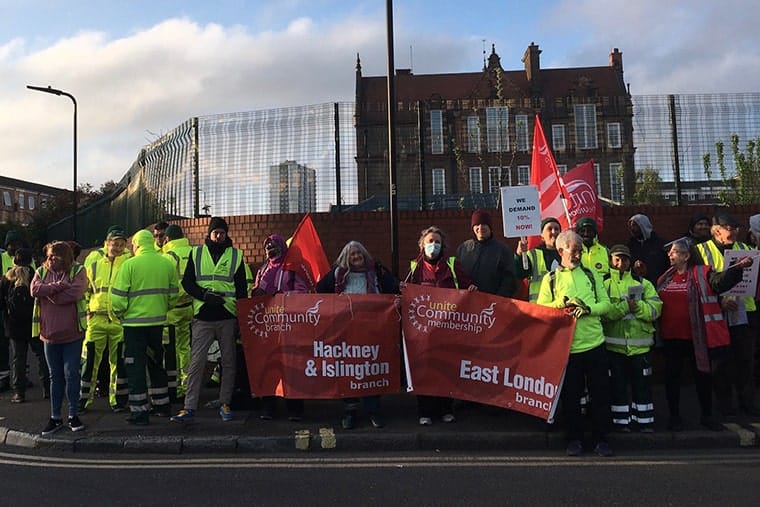