‘I’ve never seen our union be so proactive before’

‘In my area all NUT members have been invited to attend rallies to build the campaign for the strike.

The union has never been so proactive before.

We have had a local joint meeting with the ATL already. It was a great success.

One hundred and forty teachers came, mostly from the NUT, and 70 of them were reps in their schools. The room was full.

We got the reps there before the main meeting and they met with their divisional secretaries to plan the campaign.

The unity with the ATL means we are setting up meetings in schools that are being led by either an NUT or an ATL rep.

This means we can cover all 350 schools.

Nationally the NUT has employed a company to phone reps about coming to local meetings about the strike.

So far they have talked to 3,500, and around half have said they are planning to come to the divisional meetings.

We are confident of getting a yes vote but we need a huge turnout.

We fear the government is preparing for more draconian trade union laws.

We want our strike to be the beacon to start a fightback—not only to defend the pensions of public sector workers, but private sector ones too.

We have big plans for the day of the strike.

We’re going to send people round the city with leaflets explaining why we are on strike.

At lunchtime we want to have a rally and stalls in central Bristol involving all the unions, not just the ones on strike.

Every teacher needs to play their part.

Call a school meeting—if you haven’t already—take a vote for strikes, then tell your divisional secretary.

Make sure teachers in your school have received their ballot paper.

Then, go back to school and prepare for joint strikes!’ 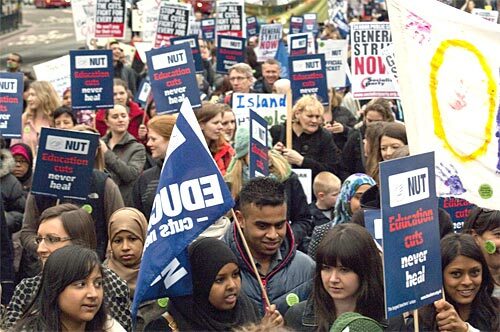 30 June: A springboard for resistance to cuts

Meeting debates how to win